An intricate tapestry of wild rivers, stark desert, rugged mountains, lush forests and gushing waterfalls, Southern Oregon is a place of magical contrasts. Outdoor enthusiasts will feel like kids in a candy store — from traversing endless hiking trails and paddling through roaring whitewater to discovering underground worlds and exploring the deepest lake in the country, this diverse region promises adventures of epic proportions. But it’s not just outdoorsy stuff here. Theater aficionados can attend an internationally renowned Shakespeare festival, history buffs can meander through old gold rush towns and foodies can sip their way through a wealth of award-winning wineries and microbreweries.

Southern Oregon is a large area that comprises numerous cities, towns, valleys, national parks and more. In the southeast corner, you’ll find Klamath Falls, Oregon’s deserts and Lava Beds National Monument, just over the California border. The bustling city of Ashland and the popular ski area of Mount Ashland are located just 63 miles west of Klamath Falls, 285 miles south of Portland, and 295 miles north of Sacramento. Drive half an hour north from Ashland and you’ll wind up in Medford, a popular base for exploring the Rogue Valley and Applegate Valley. Applegate Valley is home to historic Jacksonville and Grants Pass, the perfect place to start your Rogue River expeditions. 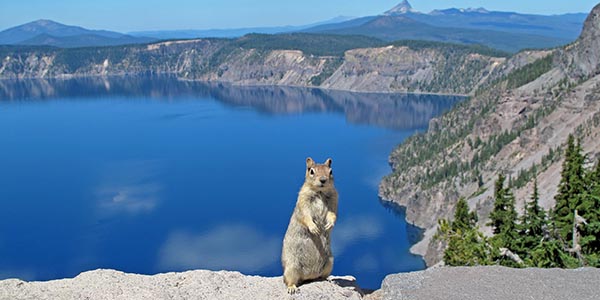 Crater Lake is a site you need to see to believe. Over 7,700 years ago, Mount Mazama erupted and collapsed in on itself. This caused a gigantic caldera measuring 6 miles wide and almost 4,000 feet deep. As time passed, the caldera filled with rain and snowmelt, thus creating Crater Lake. Today, Crater Lake is one of the deepest lakes in the world and continues to dazzle tourists, artists and outdoor adventurers with its deep blue waters and dazzling Cascade mountain backdrop. In the summer, enjoy hiking and camping in old-growth forests, take your boat out on the lake, or cruise along Rim Drive to see the park’s epic landscapes from the comfort of your car.

Not far from Crater Lake National Park is Klamath Falls, a hub for outdoor recreation. Seasoned hikers will want to tackle the famed 100-mile OC&E Woods Line State Trail, while bird-watchers won’t want to miss seeing herons, hawks, owls and over 350 other bird species in the Klamath Basin, one of the best birding destinations in America.

The Klamath region is also a bird hunter’s paradise as millions of ducks, geese and swans pass through this area every year. Thanks to loads of wooded areas and high desert, big-game hunters can snag everything from deer and elk to cougar and coyote. It won’t be hard to bag a black bear either as Southern Oregon has the most black bears in the Lower 48. Anglers dreaming of champion-sized trout will find those here too — specifically in Upper Klamath Lake, Lake of the Woods and Odell Lake. 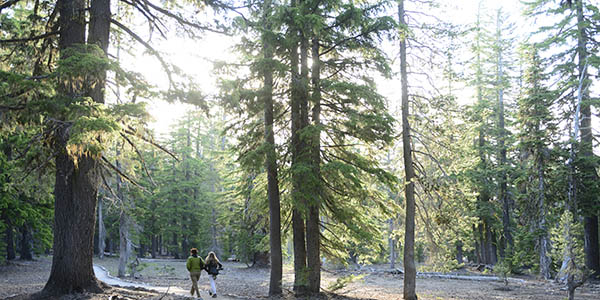 Enjoy the Finer Things in Life

Known as the cultural capital of Southern Oregon, Ashland will impress with its fine attractions, renowned eateries and the internationally acclaimed Oregon Shakespeare Festival. In need of some physical or mental soothing? Indulge in a rejuvenating soak at Lithia Springs Resort or Jackson Wellsprings. The mineral-rich waters here are said to have healing properties and will leave you feeling relaxed and calm. Check out 100-acre Lithia Park, an urban paradise with emerald lawns, tennis courts, picnic areas and dazzling landscaping. Just steps away from the festival’s theaters, the park follows Ashland Creek through rugged woodlands. Visitors also can explore the park’s Japanese garden and rose garden.

Speaking of wine, Ashland is just a stone’s throw away from a handful of wineries such as Belle Fiore Estate and Winery, Dana Campbell Vineyards, Weisinger Family Winery and Trium Wines. Stop by to sample varieties like cabernet sauvignon, merlot, chardonnay and sauvignon blanc, and take in the breathtaking mountain backdrop while you’re enjoying the fine flavors. Wine buffs who can’t get enough vino will want to go north to Grants Pass, the gateway to the Applegate Valley Wine Trail. Boasting 18 wineries, fertile valleys and dramatic hillsides, this wine trail is a feast for both the eyes and taste buds.

Theater fans from all over flock to Ashland for the Tony award-winning Oregon Shakespeare Festival. Held every year from mid-February to the end of October, this 8½-month festival has been going strong for almost 85 years and offers performances six days a week (the theater takes a break on Mondays). The festival takes place on three stages (Allen Elizabethan Theatre, Angus Bowmer Theatre and the Thomas Theatre), and puts on 11 different plays to almost 400,000 people throughout the course of the season.

If you’re more into craft beer, Medford is the destination for you. Savor a pint at top brewing companies like Opposition, Portal, Bricktown and Medford. While you’re here, catch a memorable performance at the Craterian Theater, check out old locomotives at the Medford Railroad Park, or try delicious cheeses and chocolates at the Artisan Corridor located in Central Point.

In the summer, catch dozens of concerts at Jacksonville’s Britt Music and Arts Festival. Held in a naturally formed amphitheater and featuring international artists in the classical, jazz, blues, folk, bluegrass, pop and country realm, this festival entices music lovers with incredible performances, bewitching scenery and a relaxed, easygoing atmosphere.

Just 7 miles west of Medford and 15 miles northwest of Ashland is the old mining town of Jacksonville. Gold was unearthed here in 1851, which led to loads of fortune-hungry miners settling in the Rogue Valley. The gold rush transformed Jacksonville into a prosperous town with saloons, gambling halls, supply shops, banks and a variety of businesses established by 1852. Today, many of Jacksonville’s original buildings still stand (there are over 100 on the National Register of Historic Places), allowing you to immerse yourself in a bygone era.

Explore the Victorian-style Cornelius Beekman House, the former estate of one of Jacksonville’s most wealthy families. Take a stroll through the cemetery containing some of the oldest pioneer gravesites in the entire state. Learn more about the town’s history and legends by joining a trolley tour or ghost tour, and stay the night at a historic inn. You can even pretend to be a pioneer for the day by panning for gold in the nearby Applegate River (take Highway 138 outside of Jacksonville).

Dive deeper into Oregon’s past at Pottsville Historical Museum. Not far from Merlin, this museum features thousands of items related to the state’s heritage including legislative halls, local logging woods, steam engines, tractors, old mining equipment, and even a stagecoach that ran between Kerby and Crescent City back in the day. 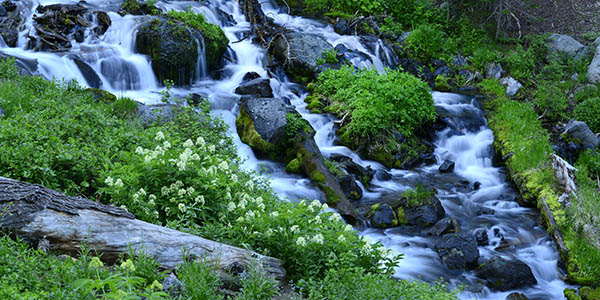 You’ve come to the right place if you’re searching for heart-stopping action. Flowing through Grants Pass, the Rogue River promises thrilling, world-class rafting with Class I to IV rapids. Book a four-day excursion to battle monster whitewater, or make a day trip and paddle through the spellbinding “Wild and Scenic” section of the river. For the ultimate rush, take a 36-mile jetboat ride through the stunning Hellgate Canyon. The river is also famed for its trophy chinook salmon, king salmon and steelhead trout. Fishing can be done year-round, but anglers say the best months for steelhead fly-fishing are December through March. For chinook salmon, cast your line in April, May or June.

Get more of your adrenaline going on the Umpqua River. Located between Crater Lake and Roseburg, Umpqua is one of the best whitewater rafting destinations in the nation. The most popular rafted stretches offer countless Class III and a few Class IV rapids scattered in between. Raft or kayak along the North Umpqua to weave through dramatic canyons and thick forests, or take it easier in South Umpqua by fishing and viewing wildlife like bald eagles, black-tailed deer, beavers, otters and more. Back on land, the Timber Trail dishes out thrills for mountain bikers.

For a change of scenery, head underground to the Oregon Caves National Monument and Preserve. Nestled in the Siskiyou Mountains, this geological wonder is packed with stalactites, stalagmites and other jaw-dropping formations. Take a ranger-led tour to learn about geology, fossils and the bats that live inside the caves. Take a three-hour off-trail caving tour to challenge your spelunking skills.

A place where the modern and the historic coalesce within a beautiful setting, Grants Pass is an all-things-to-all-people kind of town. Billed as the region’s white-water rafting capital, the Rogue River (preserved as a National Wild and Scenic River) snakes through town and provides on-the-water adventures for every mood and moment. For an adrenaline rush and spectacular scenery, visitors can take a 36-mile jet boat trip (two hours) through the dramatic Hellgate Canyon.