There’s never a dull moment in the trailblazing and offbeat city of San Francisco. This West Coast gem delivers more than its fair share of iconic moments and free entertainment, all in a compact package that buzzes with lively attractions. San Francisco also delivers the pleasurable pains associated with walking up and down a cityscape that undulates with 50-plus hills. Fortunately, you can ride on its historic cable cars through diverse neighborhoods, where you can choose from thousands of restaurants, peruse the markets of Chinatown or simply revel in views of the city’s iconic Golden Gate Bridge from coastal trails. 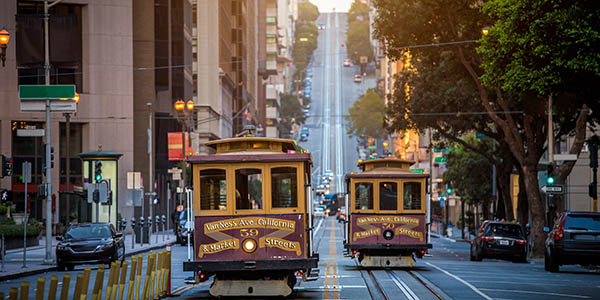 City by the Bay

Some 90 miles southwest of Sacramento and 50 miles north of San Jose, the city occupies the northern tip of the San Francisco Peninsula, with the Pacific Ocean to the west and the sprawling San Francisco Bay to the east. Famed for its mild temperatures, which rarely top 75 degrees or drop below 45 degrees, the city’s climate is comfortable throughout the summer. Heading to the city from the east? The western terminus of Interstate 80 is in San Francisco; the San Francisco-Oakland Bay Bridge carries the transportation artery on its final leg.

From the breathtaking views of the Golden Gate Bridge from the Presidio to the salty boat ride out to Alcatraz Island on the bay, San Francisco packs a lot into its roughly 7-by-7-mile footprint. Forming an east-west corridor, Golden Gate Park encompasses more than 1,000 acres of green space and historic structures. The park is home to arts and crafts at the de Young Museum and every kid’s favorite, the California Academy of Sciences, home to a world-class aquarium, planetarium and natural history museum—all under a green, living roof. The spirited Mission District showcases a mind-boggling array of independent bookshops lining streets emblazoned with interesting street art. Union Street and Hayes Valley treat fashion-forward shopaholics with an interesting array of trendy boutiques and home décor stores.

Nature Near the Bay

If you grow bored of hiking an urban environment, cross the Golden Gate Bridge northbound to the 558-acre Muir Woods National Monument. One of the few ancient redwood forests in the Bay Area, the wild expanse is laced with trails and provides a home to nearly 400 plant and animal species, along with glorious redwoods that are close to 1,000 years old and as tall as 250 feet. The crystal-clear waters of Redwood Creek provide a fertile breeding ground for coho salmon and steelhead trout. On the north edge of the city, the Presidio Batteries to Bluffs Trail treats hikers to a scenic walk that flanks Presidio’s wild western shoreline.

Prison on the Bay

No San Francisco trip is complete without a ferry ride to Alcatraz Island, a former federal prison located in the bay 1.5 miles offshore. Now run by the National Park Service, this grim complex once housed some of America’s most notorious criminals, including Al Capone, George “Machine Gun” Kelly and Arthur “Doc” Barker, part of the notorious Barker-Karpis Gang. The former prison is now open for tours. Visitors can walk the main cell house, check out the prison library and stroll the recreation yard, where escape plots were conceived when the guards weren’t looking. 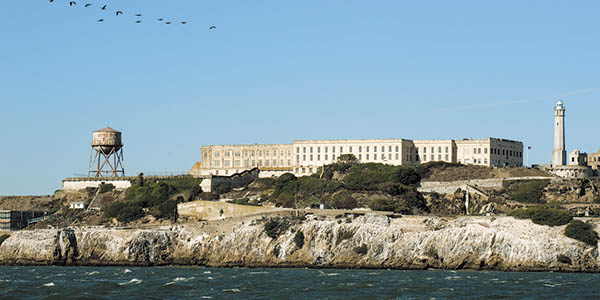 During its heyday, Alcatraz housed some of America’s most dangerous criminals.

Can’t get enough of the bay? There are more than 13 miles of hiking and biking trails at Angel Island, San Francisco Bay’s largest island (760 acres), located directly north of the city and accessed via a short ferry ride. The trail to Mount Livermore’s 788-foot summit delivers sweeping views of San Francisco and provides opportunities to encounter deer, lizards and birds, including hawks and owls. Back on the mainland, explore San Francisco’s largest stretch of sand, the 3-mile Ocean Beach, which draws experienced surfers (beware of dangerous rip currents) as well as families who stroll, skate, walk the dog, play volleyball or light bonfires.

Gourmands gather every Saturday morning at the historic Ferry Plaza Farmers Market to partake of the city’s artisan food culture, with vendors ranging from local farmers to purveyors of gourmet items. Chinatown’s commitment to preserving its rich Asian heritage reaches its zenith with exuberant Chinese New Year celebrations at the beginning of February. Mid-August, the Outside Lands Music and Arts Festival in Golden Gate Park is one of the city’s most famous events, with live music, stand-up comedy shows, outsider art exhibits, specialty cuisine, beer tasting and libations.

The Northern California Cherry Blossom Festival in mid-April celebrates Japanese culture with tantalizing Japanese food, a Grand Parade with traditional Japanese music and dance, and the Cherry Blossom Queen Program. In September, the Sausalito Art Festival showcases more than 25,000 works of art along with an excellent musical lineup and wine tasting courtesy of some of Napa and Sonoma’s most prestigious producers.

Lines snaking out the door testify to the popularity of Mitchell’s Ice Cream, a popular family-run store that has been a local institution in Bernal Heights since 1953. Hand-made daily, with a primo ratio of 16 percent butterfat (for an extra dose of creaminess), the beloved store is famed for its eclectic range of flavors, including avocado, lychee, lucuma (a superfruit imported from Peru), jackfruit and the store’s top seller, mango imported from the Philippines. The store’s second generation, Brian and Linda, have taken over the store’s reigns and still passionately churn out small batches of the award-winning ice cream.

Architecture buffs should cruise to the Marina District for a tour of the Palace of the Fine Arts, a sprawling structure built in 1915 for the Panama-Pacific Exposition. Highlighted by a central rotunda and built around a lagoon, the complex continues to serve as the setting for special events and weddings.

Most tourists make a point of visiting Fisherman’s Wharf, one of the city’s top attractions and a charming neighborhood unto itself. Located on the bay, this area’s best known for the popular Pier 39 shopping area, a great spot for people-watching and a regular haunt for street performers. The pier also attracts sea lions from time to time.

Seafood lovers who stick around the wharf for lunch can reap the reward of local treats ranging from chowder (usually served up in a bread bowl made from San Francisco’s celebrated sourdough) or locally caught Dungeness crab. From Pier 39, it’s seven blocks to Ghirardelli Square, where the beloved Ghirardelli Chocolate Company serves its distinctive, square-shaped treats. The Ghirardelli Chocolate Festival, held every September, tantalizes the taste buds of chocoholics.

Sporting by the Bay

Sports fans may know San Francisco as home of two storied teams: the San Francisco Giants (baseball) and the 49ers (football). Neighboring Oakland, separated from San Francisco proper by the Oakland Bay Bridge but still very much a part of the Bay Area’s cultural landscape, has pro teams of its own: football’s Raiders, baseball’s Athletics and basketball’s Golden State Warriors. San Francisco also hosts a number of running events throughout the year, including the San Francisco Marathon and the annual Bay to Breakers, purported to be the longest-running footrace on earth.

Feeling groovy? Folks who can hum along with Jefferson Airplane and Moby Grape should make the pilgrimage to the Upper Haight (aka Haight-Ashbury, after its most famous intersection). The neighborhood was ground zero for the flower child subculture that peaked in the 1967 Summer of Love (the Grateful Dead and Janis Joplin held court here). Today, the offbeat spirit thrives in unique boutiques, restaurants and galleries that carry on the area’s nonconformist traditions.

War Between the States

On the San Francisco side of the bridge, visitors can experience Civil War History at Fort Point. Overlooking the entrace of the bay, the imposing brick fortification, built at the outbreak of the war between the states, was designed to repel enemy ships. National Park Service rangers give tours to the impressive structure.

San Francisco began life as a small settlement of Spanish explorers who took advantage of the vast natural harbor in the 1700s. After California passed into U.S. hands, the city grew to be a vital hub of wealth-seekers during the Gold Rush of the mid-19th century. Luminaries ranging from writer Mark Twain to opera star Enrico Caruso were seduced by the town’s considerable charm.