The North Coast of Oregon isn’t just a place, it’s an enthralling journey that will leave you forever changed. From following Lewis and Clark’s footsteps and reeling in whopping 50-pound salmon to sampling award-winning cheeses and traversing the world-renowned Oregon Coast Trail, this beloved stretch from Astoria to Pacific City will ignite the adventurer, foodie and historian in you. 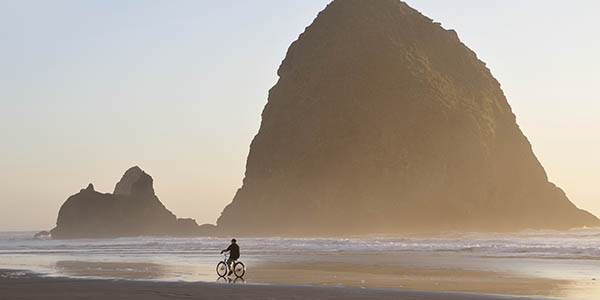 Dubbed “Little San Francisco,” Astoria is an earthy, character-rich city where Victorian mansions and old cannery piers are mixed in with hip cafes, and boutique hotels. It’s the oldest American settlement west of the Rockies, and the best place to dig deeper into its colorful past is at the Columbia River Maritime Museum. For more history, make your way to Fort Clatsop, established in 1805 by Lewis and Clark. Informative exhibits, multimedia programs, costumed reenactors and a re-created fort make this one of the best stops within the Lewis and Clark National Historical Park. Those in search of epic scenery will find it at the top of Astoria Column, a lighthouse-like tower that provides incredible views of the city and beyond. For more of a challenge, climb nearby Saddle Mountain for panoramic views.

Seaside became Oregon’s first beach resort town in the mid-1800s, and not much has changed since then. Amble along the 1.5-mile promenade to discover shops, restaurants, arcades, bumper cars and the Seaside Aquarium, one of the oldest on the West Coast. The crown jewel of the promenade is the historic automobile turnaround, designed to turn traffic around when the street dead-ends with the Pacific Ocean. In the center of it, you’ll find the Lewis and Clark statue, marking the last stop of Lewis and Clark’s epic expedition. On the beach, dig for clams, enjoy a sunset or watch athletes compete in the Seaside Beach Volleyball Tournament in August, the biggest event of its kind in the world.

Dig your toes into the shores of Cannon Beach and you’ll understand why National Geographic named it one of the 100 most beautiful places in the world. Featuring the iconic 235-foot Haystack Rock soaring above the shoreline and endless stretches of fine-sand beach, Cannon Beach is a feast for your eyes. Take it all in as you wander the seaside and don’t miss the vibrant tide pools and nesting seabirds along the way. Cannon Beach will impress with its great selection of art galleries, specialty shops, cafes and restaurants. Popular activities include attending live theater performances and watching glassblowers create elaborate masterpieces in their studios.

Not far from Cannon Beach is Ecola State Park. Located on the edge of a headland, this park guarantees dazzling views over the coast, excellent whale watching spots, bird-watching galore and a wealth of hiking opportunities, including an 8-mile section of the Oregon Coast Trail.

Visit the Village of Garibaldi

Situated at the northern tip of Tillamook Bay, Garibaldi is home to an active port, marina and quaint community of 1,000 residents. It’s also the perfect place to watch the world go by. Stroll the marina and see fishermen haul up Dungeness crab, ling cod and rockfish. Board the Oregon Coast Scenic Railroad, a historic steam train that chugs along Tillamook Bay. Hop in a kayak and paddle out in search of bald eagles and purple martins. Take a charter to the deep sea and catch halibut, tuna, sea trout and more. In town, a maritime museum, handfuls of shops and fantastic sea-to-table restaurants will keep you occupied. Keep your ears open and you may even find out where locals dig up their bounty of butter clams.

Sweet Dreams Are Made of Cheese

Tillamook is every cheese connoisseur’s favorite stop. The town is the birthplace of Tillamook cheese, and the Tillamook Dairy Co-Op invites you to come in for a free, self-guided tour through its facility. See how cheese is made, learn about dairy farming and gorge on as much cheese as your arteries can handle. When your tour wraps up, swing by the Food Hall if you’re still feeling peckish and stock up on cheddar, Monterey Jack, provolone and Tillamook memorabilia at their on-site shop. You can burn those calories off by hiking to Munson Creek Falls, a 0.3-mile trail close by that weaves through old-growth forests before reaching its namesake cascade, the tallest waterfall in the Coast Range.

Pacific City Will Reel You In

Follow the path less traveled by visiting Pacific City. Nestled on the outskirts of the Three Capes Scenic Drive, this serene coastal community is jampacked with outdoor recreation. Anglers will want to head to Bob Straub State Park and toss a line in Nestucca River, a waterway harboring 50-pound chinook salmon. The park provides beach access, so get ready to surf, spot marine mammals and hunt for sea treasures like sand dollars and hermit crabs. 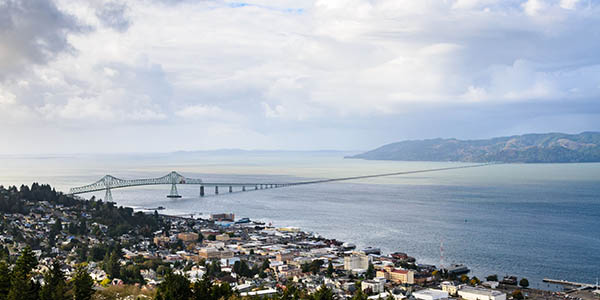 The Astoria-Megler Bridge runs 4.1 miles as it spans the mouth of the Columbia River.

Beginning at the Columbia River and ending at the California border, the Coast Trail is worthy enough to top any hiker’s bucket list. This 382-mile route connects the Beaver State’s North, Central, and South coasts by winding through coastlines, rainforests and charming seaside communities. What sets this famed trek apart from others is that it allows you to explore Oregon’s coast in sections as a single hike or through a multiday trek. Sand makes up more than half of the trail, making a distinctive hiking experiences.

On the North Coast, a popular stretch of the Oregon Coast Trail connects Arch Cape to Oswald West State Park. Easily accessible from Cannon Beach, this path includes a foot suspension bridge that crosses Arch Cape Creek and leads you to the enchanting headlands of Cape Falcon and Neahkahnie Mountain. Avid bird-watchers should follow the route from Cape Meares State Scenic Viewpoint to Oceanside Beach State Wayside to witness one of the biggest bird colonies in North America. Bald eagles and peregrine falcons are often seen soaring here.