With towering mountains, stunning shores and lush forests, the Olympic Peninsula is one of the few untamed regions in the United States. On the coast, inviting towns provide the launchpad for adventures inland to the Pacific Northwest’s crown jewel, Olympic National Park. Elsewhere on the 3,600-square-mile peninsula, the emerald-green rainforests of Hoh and Quinault, sapphire lakes and mile-after-mile of rugged coastline form the backdrop for a mind-blowing array of recreational activities. With a dynamic cultural scene, the Olympic Peninsula allows travelers to bookend active days with artsy pursuits, lively festivals and historical sights.

Located in the northwest of Washington State, the Olympic Peninsula sits across the Puget Sound from Seattle and just south of Victoria and Vancouver Island. From the south, the Olympic Peninsula can be reached via Highway 101, which connects to Interstate 5 in Olympia. Elsewhere, the peninsula can be reached via ferries that cross the Puget Sound.

With a number of microclimates, the Olympic Peninsula’s weather patterns fluctuate greatly. Moist ocean air from the Pacific Ocean drenches the temperate rainforests of the west side with over 10 feet of rain a year. The towns on the peninsula’s north and east flanks benefit from the lowest rainfall in western Washington, as low as 12 inches per year. Temperatures are mild year-round, with summer highs rarely over 80 degrees July and August draw the most crowds due to the warm, drier temperatures, albeit still volatile. Despite the summer sunshine, a blanket of fog enshrouds the coast.

Declared a national park in 1938, Olympic National Park is famed for its diverse ecosystems, including one of just a handful of temperate rainforests in the world. A huge swathe of old-growth forest, glacier-clad peaks and alpine meadows make this 922,650-acre park a natural wonderland. The region surrounding the park is equally spectacular, boasting the longest undeveloped coastline in the contiguous United States. This provides a backdrop for myriad activities, including hiking, fishing, kayaking and skiing. Check out the Elwha River for prime fly fishing. 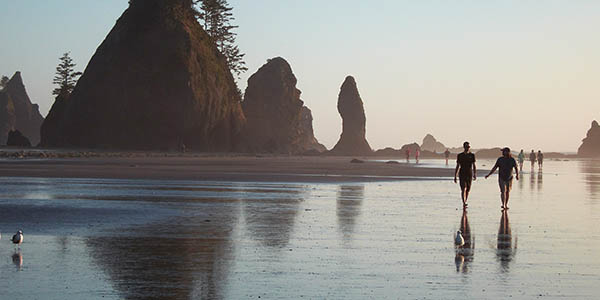 Cape Flattery delivers drama befitting its status as the most northwesterly point in the lower 48 states. With wind-ravaged cliffs that plummet 60 feet into the wild Pacific Ocean, it’s a breathtaking sight. In Port Townsend, situated in the peninsula’s northeast corner, Fort Worden State Park harbors over 100 historic structures, scattered across two miles of shoreline. Fort Worden is one of three forts constructed to protect the Puget Sound area from attack during the Spanish American war. Onsite, the Puget Sound Coast Artillery Museum focuses on the Puget Sound’s harbor defense system from the late 1800s to the end of World War II. On the pier at Port Townsend, the small but excellent Marine Science Center features interactive natural history exhibits, including a fully-articulated orca skeleton, as well as an aquarium with touch tanks. Across the ocean coast, visitors stand a good chance of seeing seals.

Boasting an epic scale combined with a mild climate, the Olympic Peninsula is a mecca for adrenaline-fueled adventures. With over 900 miles of trails, including 73 miles of pristine Pacific coastline, the region boasts an incredible diversity of hikes that traverse rainforest, coast, mountains and alpine valleys. The park’s incredible birdlife draws keen ornithologists, who convene to log threatened and endangered species, including the northern spotted owl and marbled murrelet.

A 65-mile drive inland from Port Townsend, Hurricane Ridge, in Olympic National Park’s northeast region, delivers intense hiking terrain through forested mountains, with steep descents to subalpine lakes and valleys. Some 15 miles west of Forks, at the western edge of the peninsula, Push is one of the best surf spots in the state. Along the north coast, anglers head to the Strait of Juan de Fuca for monumental catches of halibut and salmon. Rugged coastal scenery abounds on Ruby Beach and Rialto Beach, and fantastic catches await off the coast of Sekiu, on the peninsula’s north coast. Also along the north coast, the Salt Creek recreation area dazzles with its rugged rocks.

In May, the Sequim Irrigation Festival triumphs the flourishing agricultural industry of the Sequim-Dungeness Valley with a lively parade, art walks, family-themed activities, a street fair, a logging show and a carnival. In June, Port Townsend celebrates its status as the best place in the U.S. to view orcas, humpbacks, gray whales, fin whales and minke whales with the month-long Orca Festival, featuring seminars and interactive activities. 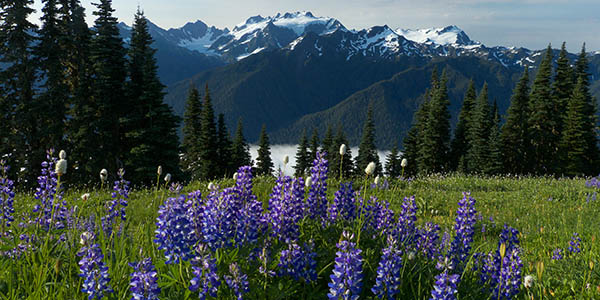 With a nifty microclimate that boasts radiant sunshine, Sequim holds an affectionate place in the hearts of folks who love lavender. The mild climate is ideal for the cultivation of the plants, which gives Sequim a look that’s more Provence than Washington State. A lavender trail connects the lavender farms that dot the valley, and farm stores purvey myriad iterations of lavender products. Before lavender, Dungeness was famous for its crab. Seafood restaurants serve up the crustacean in a variety of forms. To the north, the six-mile-long Dungeness Spit is the world’s longest sand spit and the heart of the region’s fishing industry.

Port Angeles, west of Port Townsend on the peninsula’s north coast, sees lots of visitors passing through en route to Victoria on Canada’s Vancouver Island (a ferry connects the two cities). The town has a pleasant waterfront lined with boutiques and restaurants along with more than 38 outdoor sculptures. It’s also an access point for a 25-plus-mile portion of Olympic Discovery Trail, which leads all the way to the nearby town of Sequim to the east. Cycling along the Discovery Trail is a great way to see the scenery. Farther east, Port Ludlow is another worthwhile stopping-off point, with easy access to the Olympic National Park and several attractions of its own, including 26-plus miles of trails, a marina with kayaks and stand-up paddleboards and an 18-hole championship golf course.

The Olympic Peninsula is home to eight tribes with ties to the region that date back over 12,000 years. Today, these communities remain allied to the culture, landscape, heritage and tradition of the region and imbue the peninsula with a palpable sense of history. Olympic National Park is dotted with over 650 archeological sites and historic structures that speak to the park’s epic frontier history and economic development. Since the 1880s, the Olympic Peninsula’s primordial landscapes, diverse wildlife and human history have become a magnet for environmental advocates, botanists, naturalists and wild-at-heart travelers.

Learn more about the indigenous past at the Makah Museum, which displays artifacts retrieved from the nearby Ozette Archaeological Site along with a rotation of exhibits focusing on clothing, photographs and indigenous arts. If you happen to be visiting in late August, the annual three-day Makah Days features traditional and contemporary activities.

Head inland to Lake Crescent, a glacially carved body of water offering a cool, idyllic spot for swimming, boating, camping and, naturally, fishing. Lake Crescent also has several beaches and a trail leading to a favorite swimming spot known as Devil’s Punch Bowl. Jumping off the low, arching bridge that spans the water here is a favorite pastime. Another trail leads to Marymere Falls, one of 26 spectacular waterfalls along the Olympic Peninsula Waterfall Trail.

Southeast of Neah Bay lies Forks, a great base camp for exploration of the inland forests. With its mystical ambience and idyllic forested landscape, the Forks area is known as the setting for the “Twilight” movie franchise. Check out the Forks Timber Museum, showcasing exhibits focused on the area’s lumber industry. At the western edge of Olympic National Forest, La Push is one of the top surf spots on Washington’s coast.

Northeast of Forks is Sadie Creek, popular with mountain bikers, and Clallam Bay, with boat launches and lots of dive shops. Take a selfie near the statue of the area’s mascot, Rosie the Walking Fish, which overlooks Clallam Bay.