Part of the Ring of Fire volcanoes that tower on the Pacific Rim, Washington’s Mount Rainier and Mount St. Helens are two of the most awe-inspiring mountains in the United States. Mount Rainier stands about 65 miles southeast of Seattle, and on clear day the 14,411-foot-tall peak is visible from the city. Mount St. Helens Volcanic Monument rises 90 miles south of Rainier, and the scars of the volcano’s 1980 eruption are visible throughout the rugged landscape. Both mountains are prized destinations for hikers who crave beautiful terrain, stunning views and compelling history as they traverse the trails.

Nicknamed the “Roof of Washington,” Mount Rainier frequently gets showered in rain at elevations between 5,000 and 8,000 feet, and snow cover is maintained on Rainier well into mid-July. Most visitors from Seattle access Mount Rainier via Interstate 5 south and then National Park Highway 7, which leads to the Nisqually Entrance. At Mount St. Helens, it’s a little warmer, with mid-summer highs in the low 80s, which is the best time to view the eruption damage and revitalized ecosystem. Most visitors access Mount St. Helens National Park from Highway 504 on the west side, where you’ll find the two visitor centers: Johnston Ridge Observatory and the Forest Learning Center. 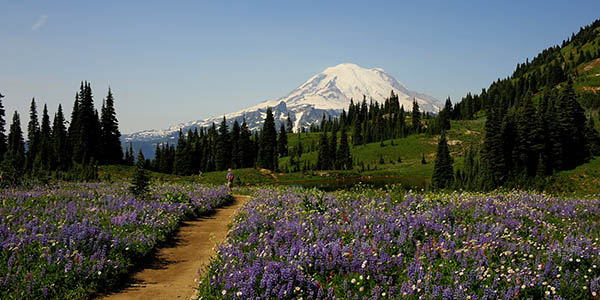 Mount Rainier is considered the largest single-peak glacier system in the world, distinctive for its 36 miles of glaciers draped across the mountain. Mount Rainier National Park encompasses over 368 square miles, 97 percent of which is designated as wilderness. The Longmire Historic District preserves the largest ensemble of National Park Service rustic-style structures in the park, with 58 buildings. The 0.7-mile Trail of the Shadows skirts the mineral springs that belonged to the early hotel, as well as a reconstructed cabin built in 1888. The Longmire Museum provides a fine induction to the mountain, with a number of exhibits on American Indian culture, European exploration, natural history and flora and fauna.

Most visitors to Mount St. Helens National Park come to witness the sheer devastation of the 1980 eruption and to photograph North America’s most infamous volcano. The park’s two visitor centers are located on the west side: Johnston Ridge Observatory and the Forest Learning Center. Just five miles from the crater, the Johnston Ridge Observatory delivers stunning views of the volcano and features a number of exhibits with state-of-the-art interpretive displays and a theater, which elucidate the volcano’s cataclysmic, geologic events and present compelling narratives from eruption survivors. 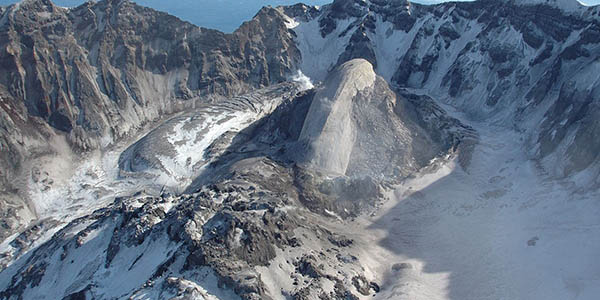 Both Mount St. Helens and Mount Rainier offer a bounty of outdoor recreational pursuits, including hiking, hunting, horseback riding, non-motorized boating, bicycling and snow sports in the winter. Mount Rainier has over 260 miles of maintained trails that traverse old- and new-growth forests, alpine lakes, waterfalls and river valleys carpeted with wildflowers. Visitors can drive up to an elevation of just over 6,500 feet. Anything above that is a serious climb, requiring mountaineering experience and all the requisite technical gear; with a success rate of around 50 percent, most expeditions to the summit last two days and should always be attempted with a guide.

Wonders on the Mountain

The 93-mile Wonderland Trail is a strenuous hike that circumnavigates Mount Rainier and delivers superb views of the mountain from every angle. To hike the full trail, you’ll need about two weeks, but the trail is also segmented into day hikes, including novice and intermediate-rated trails. Along the trails, wildlife lovers will be rewarded with potential sightings of the park’s rich wildlife, including marmots, coyotes, elk, deer, fox and black bear.

Trek to the Crater

Experienced hikers can climb to the top of Mount St. Helens in seven to twelve hours for breathtaking views into the caldera and to feel a sense of raw geology. With an elevation gain of 4,500 feet in five miles, the crater hike is no cake walk but does not require technical skills. The 28-mile Loowit Trail encircles Mount St. Helens to provide sublime 360-degree panoramas and views of the blast recovery area. For novice hikers, the shorter Eruption Trail affords views of the lava dome, crater and landslide deposit.

In May, the three-day Rainier Independent Film Festival screens works by local and national independent filmmakers and hosts filmmaking workshops, seminars, Q&As and themed parties. In September, the region’s passion for the great outdoors is celebrated at Rainier’s Mountain Festival with talks and demos by the nation’s top climbers, live music, family activities and booths with local outfitters and vendors purveying outdoor clothing and gear.

In Mount St. Helens, the Bluegrass Festival in August is the region’s top musical event. In addition to mountain music, bluegrass, jazz and jam sessions, courtesy of local and international artists, there are workshops and family-oriented events. In Woodland, the Hot Summer Nights concert series features live music across the musical spectrum set against the serene backdrop of Horse Shoe Lake. Summer on the Mountain is a public event series at Mount St. Helens, with seminars, lectures and workshops hosted by the Science and Learning Center and the Johnston Ridge Observatory.

In the Gifford Pinchot National Forest, south of Mount St. Helens, the Ape Cave lava tube makes for a worthy companion piece to Washington’s volcanoes. The 2.5-mile lava tube was formed around 2,000 years ago and is the longest continuous lava tube in the U.S., and one of the longest on the continent. Discovered by a logger in the early 1950s, it was named for local Boy Scouts (known as the Apes) who conducted the first detailed surveys of the tube. A short, paved trail leads from the parking lot (with a visitor center and facilities) to the cave’s lower entrance and interpretive area. A steeper and much more challenging trail (narrow tunnels and a wall to climb) funnels to the upper entrance, from where visitors can hike back through a mixed-species forest stand.

Trails to a View

Some of the best trails in Gifford Pinchot include the Norway Pass to Mount Margaret (just over 10 miles round trip), which leads through wildflower fields to a ridge that offers jaw-dropping views of Rainier, Adams and Hood, as well as Mount St. Helens. A more challenging hike (narrow trails with steep drop-offs) to Harry’s Ridge (8 miles round trip) leaves from the Johnston Ridge Observatory with views of the crater’s mouth along with Loowit Falls and an emerging glacier.

Zip Among the Trees

If you prefer treetop adventure to subterranean trails, drop in on Mount St. Helens Zipline Adventures. Located in Silver Lake, this attraction allows adventure-seekers to strap into harnesses and zip along lines strung between trees.