Located in the heart of the desert just east of Phoenix, the neighboring communities of Mesa and Apache Junction are laid-back towns with deep Wild West roots. Along with myriad museums focusing on everything from Southwest history to fine arts, the region also boasts major league spectator sports along with stunning golfing courses and ample trails, rivers and lakes for recreation. 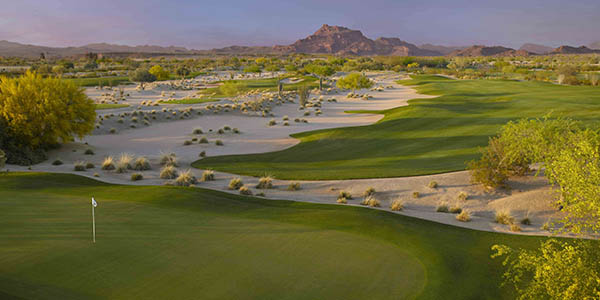 Golfing in a desert landscape.

Mesa and Apache Junction constitute two contrasting sides of the central Arizona coin. With a population of 500,000, Mesa has all the museums, sports facilities and built-up urban amenities of a big city. In contrast, Apache Junction, with a population of less than 40,000, revels in its small-town roots. Both communities sit just east of Tempe, straddling highways 60 and 202. The gargantuan Tonto National Forest is accessible to the northeast via Arizona state Route 87, and the metropolis of Phoenix is just a half-hour to the west. Daytime temperatures rarely dip below the 60s in the months of December and January. However, it can get hot June through August, with highs hovering around 100 degrees.

Sports lovers and outdoorsy folk will feel right at home in the Mesa and Apache Junction area. Despite the twin towns’ desert location, there are plenty of water sports and fishing opportunities nearby, particularly on the Salt River, as well as on nearby Theodore Roosevelt, Apache, Canyon and Saguaro lakes. Just outside of town, Lost Dutchman State Park features miles of trails that connect directly to the gorgeous Superstition Wilderness, plus a 4-mile mountain bike loop trail for folks who like two-wheel adventure. If you happen to visit Lost Dutchman in the early spring, you’ll be rewarded with a profusion of gorgeous wildflowers. The region is dotted with more than 40 golf courses offering everything from traditional greens to distinctive desert golf environments.

An Oasis of Museums

The Mesa/Apache Junction area is a prime roost for culture vultures. Mesa features more than 200 public outdoor sculptures and is home to the Mesa Arts Center, a massive complex complete with four theaters, five art galleries and 14 art studios. Other museums include the i.d.e.a. Museum for children, the Mesa Historical Museum, and the Arizona Museum of Natural History, which boasts the largest dinosaur exhibit west of the Mississippi River. The Arizona Commemorative Air Force Museum offers several war exhibits, including aircraft from World War II, while the Superstition Mountain-Lost Dutchman Museum showcases artifacts that tell the story of the area’s compelling mining past.

Savor a slice of the Old West with a visit to the Goldfield Ghost Town, a replica of a bustling 1800s settlement northeast of Apache Junction. Here, visitors can pan for gold, ride on a narrow-gauge train and even witness a re-enactment of a shootout gunfight. Just 15 miles to the west in Mesa, Rockin’ R Ranch also showcases Wild West life, with an all-you-can-eat barbecue dinner and live cowboy-inspired entertainment.

Mesa is also a popular spot for fans of America’s favorite pastime: Both the Oakland Athletics and the Chicago Cubs Major League baseball teams train here during the spring months, and March alone sees some 200-plus baseball games as part of Cactus League competition across the region. Mesa also has hosted NCAA and NJCAA National Championship games, adding to its significant sports cred.

Food and agritourism boom in Mesa; the town even has a Fresh Foodie Trail that leads visitors to local farms for sampling some of the best produce the region offers. Stop-offs include the Orange Patch, where foodies can sample delicious citrus, as well as Superstition Farm, where ice cream, gourmet cheeses, fruit preserves and honey tantalize taste buds. Schnepf Farms, famous for succulent peaches, serves up a farm-to-table dinner offering. Queen Creek Olive Mill conducts hourly olive oil tours and entertains guests with its Tuscan-themed cafe, complete with live music on weekend evenings. Don’t turn back before stopping at the Windmill Winery in nearby Florence.

Native American people thrived in the area around Mesa as far back as 2,000 years ago. The area’s Hohokam people created a complex irrigation network comprising 500 miles of canals for an estimated 100,000 acres of crops, and their land stretched as far south as modern-day Mexico. The story of the Hohokam’s achievements is told in the Park of the Canals, a 31-acre park complete with signage detailing the historical background of the canals along with a desert botanical garden. Also, the Mesa Grande Cultural Park temple mound is an ancient Hohokam structure that sheds light into their religious customs. The Arizona Museum of Natural History’s Southwest Gallery showcases replica Hohokam dwellings and a large collection of artifacts ranging from jewelry to earthenware pots. 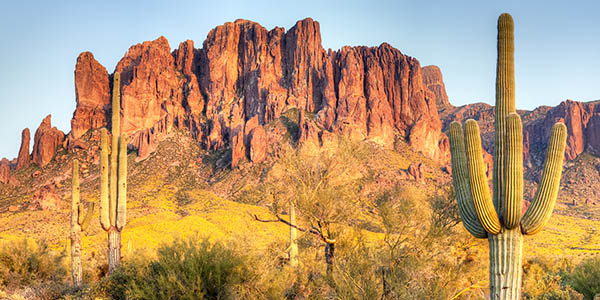 Flowers bloom in at the feet of the Superstition Mountains.