Where the Water Is

Impounded by the Parker Dam, this western Arizona attraction lies 65 miles south of Bullhead City and about 150 miles south of Las Vegas on U.S. Route 95. The 45-mile-long lake straddles the border between California and Arizona, and sits at the foot of California’s Chemehuevi Mountains. It’s a popular stopover en route from Joshua Tree National Park (150 miles away) to Grand Canyon National Park (227 miles). There are on average 290 sunny days per year in Lake Havasu, with a high temperature of around 109 degrees in July and an average January low of 42 degrees.

The area’s diverse and often surreal landscape includes rolling sand dunes, yawning canyons, and rugged mountains populated with more than 200 species of birds and wildlife, as well as Arizona’s signature saguaro cactus and prickly pear cactus. Havasu ranks as one of the best fishing spots in the Southwest, with trout, bass, catfish and crappie biting in abundance. 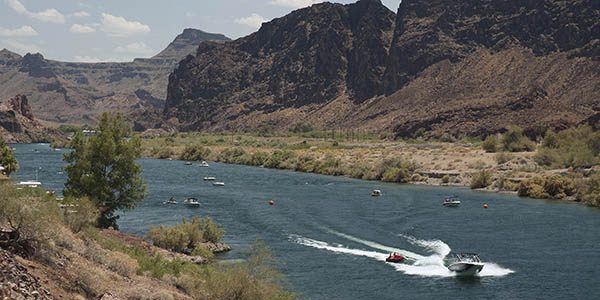 Boating on the Colorado River near Lake Havasu.

The construction of the Parker Dam in 1938 led to the creation of the lake, but it wasn’t until 1963 that the city of Lake Havasu was founded by oil tycoon Robert McCulloch. When the town’s heat and remote location failed to excite East Coast snowbirds, McCulloch came up with a shrewd marketing plan: In 1968, he bought London Bridge, which had arched over the Thames for decades, for a price of $2.4 million. He arranged for it to be disassembled and shipped in pieces to Arizona. Once it was rebuilt in 1971 to connect the shore to a small island, the new community received instant media buzz.

At the Lake Havasu City Visitor Center, you can sign up for a 90-minute walking tour of London Bridge. Informed guides relate the bridge’s history and relocation, and tours are peppered with interesting anecdotes and observations, including the bridge’s pockmarks, inflicted by German aircraft during World War II. 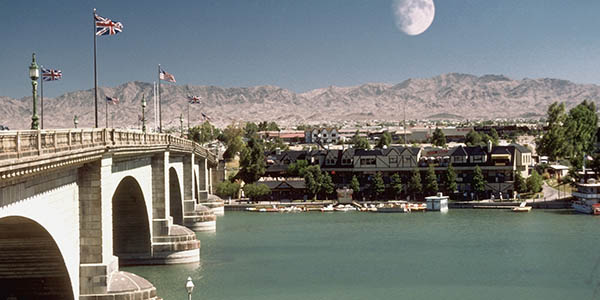 British flags on Arizona’s most famous import, the London Bridge.

Another popular activity is to hike or take a boat ride to more than two-dozen lighthouses. Lake Havasu City boasts more of these navigational aids than any other U.S. city. As well as operational lights, these structures are scaled-down replicas of the nation’s most famous nautical beacons. A crowd-pleaser for families with kids, Havasu’s Aquatic Center is an indoor water park that offers a mix of waterslides, wave pools, an outdoor splash area, children’s pools and daily classes and programs.

At the Lake Havasu Museum of History, you can explore the region’s Native American history as well as discover the seminal events in the city’s development. The museum also provides an overview of the wildlife in and around Lake Havasu City, which includes desert bighorn sheep, coyote and reptile species. There’s even an exhibit on British culture.

The Havasu National Wildlife Refuge is located at the lake’s northern recesses, while the Bill Williams River National Wildlife Refuge is found to the south. Surrounding the lake, Havasu’s little-visited backcountry comprises six wilderness areas with a mesmerizing array of flora and fauna, as well as the vestiges of historic mines, ghost town sites, fascinating geological features, hiking trails and off-road mountain biking.

January’s Lake Havasu Balloon Festival features colorful craft floating over the water. Balloon glows, vendors and a carnival make this a must-see  event. In February, the retro Rockabilly Reunion plays host to the nation’s largest ’50s-themed car show. There’s also live music, one of the West’s largest “Pin Up Pageants,” and appearances by local and national celebrities. In March, the Bluegrass on the Beach Music Festival draws bluegrass stars for three days of music, dancing and jamming classes.