Visitors who stand on the edge of the Grand Canyon are treated to an ever-changing view, as light and shadows dance on the myriad layers of rock throughout the day. The sheer magnitude of the 6,000-foot-deep, 18-mile-wide gorge overwhelms the eye and challenges human comprehension. While the rock walls near the rim are stark and barren, the canyon’s floor comprises a lush valley split by the rushing waters of the Colorado River. This waterway carved this canyon over a span of millions of years, leaving behind a monument that’s long considered one of the world’s greatest natural wonders. The Grand Canyon was preserved as a national park in 1919 and now attracts over 6 million visitors a year.

The Grand Canyon’s location in northern Arizona puts it close to the states of Utah and Nevada. Visitors heading to the South Rim often take Interstate 40, parts of which follow the trek of old Route 66, to the town of Williams and then head north on Highway 64. Visitors to the less-visited North Rim travel Highways 89 and 89A before catching Highway 67 south. The closest large city is Flagstaff, which lies an hour-and-a-half southeast. The small town of Tusayan is just outside the national park gate and provides a host of amenities. Due to the elevation changes, weather varies greatly. The areas on the edge of the canyon rims receive snow in the winter but can be extremely hot and dry in the summer. 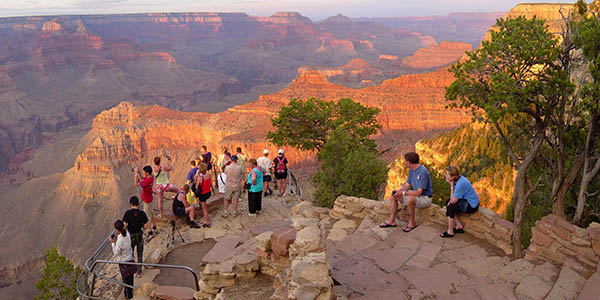 Bring a sturdy pair of hiking boots if you plan on exploring the depths of the Grand Canyon. Trails range from quick jaunts near scenic overlooks to the daunting rim-to-rim trail, which involves an overnight stay on the canyon floor. An iconic way to travel the trails is with a mule ride. These steady animals have been carrying visitors into the lower reaches of the canyon for over a century. Instead of looking down into the canyon from the rim, those who book a rafting trip along the famed Colorado River get to marvel at the massive canyon walls rising on each side from the depths of the valley. Fishing and hunting can be enjoyed in the Kaibab National Forest, which partially borders the Grand Canyon on the south rim at the canyon’s eastern edge.

Known as the “People of the Blue-Green Waters,” the Havasupai Tribe occupies some of the most majestic lands deep within the Grand Canyon. The chance to see the stunning blue waterfalls contrasted against the red canyon walls lures visitors to attempt the difficult hike to the tribe’s remote lands. Similarly, the National Park Service provides amenities on the canyon floor in a historic district known as Phantom Ranch. Completed in 1922, this lush oasis is only accessible by mule, by foot or by rafting the Colorado River.

Views to a Thrill

Get the adrenaline pumping at the Skywalk in Grand Canyon West. Located at Eagle Point, this horseshoe-shaped bridge juts out over the rim and is suspended 4,000 feet above the canyon floor, with phenomenal views for those who are brave enough to walk it. The bridge’s glass bottom affords you a clear view of the riverbed below.

More stellar views await visitors on the east end of the canyon. Jutting into the Canyon from the South Rim, Yavapai Point overlooks stunning views of the terrain below along with the Colorado River. Fans of beautiful sunsets gather here to watch the dusk light bathe the rock walls in golden hues. Learn about the formation of the canyon at the Yavapai Museum of Geology, often referred to as the Yavapai Observation Station. Hands-on exhibits give visitors a visceral sense of the substance that constitute this massive phenomenon, while educational displays outline the canyon’s 17-million-year history. 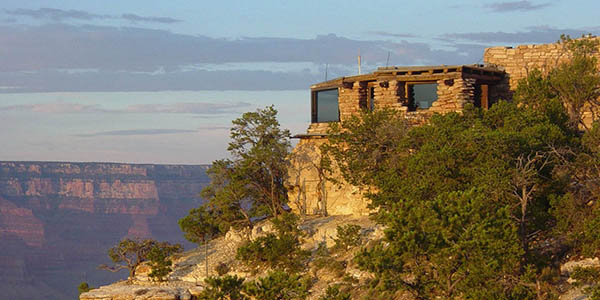 Each June, the Grand Canyon plays host to the annual Star Party, where skygazers congregate to celebrate the points of light in the inky blackness. Because of the region’s clean air, low humidity and lack of light pollution, constellations pepper the sky in an amazing profusion. Each year, astronomy clubs and amateur astronomers bring their telescopes to the park and share them with visitors, offering the opportunity to get close-up views of celestial bodies.

In 2019, the Grand Canyon will host centennial celebrations to commemorate the 100-year anniversary of its national park designation. Several special events will take place throughout the year at the South Rim, North Rim, Desert View, Inner Canyon and surrounding gateway communities. Celebrations also will recognize Grand Canyon’s significant cultural history and relationships with the park’s 11 traditionally associated tribes, which include the Hualapai Nation.

Long before throngs of visitors from the east began arriving at the Grand Canyon by stagecoach, the region was home to the Ancestral Pueblo peoples and other Native American tribes. This rich history can be explored at the Tusayan Ruins and Museum, which is located near the ruins of an 800-year-old settlement. Nearby stands the Desert View Watch Tower, a massive stone tower built in 1932 to resemble Native American architecture. Designed by Mary Colter in 1932, the 70-foot-high Desert View Watchtower is modeled after ancient pueblo towers found at Mesa Verde and Hovenweep. Get more information at the bookstore in the watchtower.