Once a crucial hub on Old West stagecoach and railroad routes, Benson now serves as a favorite tourist stop along Interstate 10. The town honors its pioneering past with festivals and museums, and visitors can experience desert environments that have remained unchanged since the days before settlers crossed the arid landscape. Highlights include Kartchner Caverns State Park, stunning trails and Old West history.

Twelve miles south of Benson, recreational opportunities abound above and below ground. At Kartchner Caverns State Park, visitors can explore 2.4 miles of passages that wind through limestone rock and jaw-dropping rock formations. Would-be spelunkers can marvel at cave phenomena like stalagmites and soda-straw stalactites; on the surface, the Foothills Loop Trail leads to the recently completed Ocotillo Trail, home to the colorful namesake desert plant.

Ready to hit the trails? Steer your vehicle toward the craggy peaks of the Dragoon Mountains to the east of Benson, home to the Cochise Stronghold. In this rough landscape, the Apache warrior Cochise staged a tenacious guerrilla war against the U.S. armed forces. To the southwest, nature trails thread through Coronado National Forest, with Sonoran grassland, chaparral and pinyon-juniper. 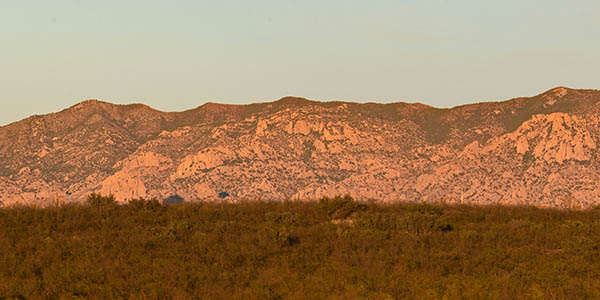 The sun is setting casting a colorful light on the Dragoon Mountains in this wide panoramic photograph.

Don’t miss the annual Butterfield Overland Stage Days. Held every October, this festival that celebrates the mythical vehicles that transported passengers across wild lands. The Old West days come to life 13 miles to the north at Gammons Gulch Movie Set, which once served as the backdrop for TV and film Westerns.