A massive white waterfall tumbling down a verdant hillside. A stunning sapphire lake surrounded by evergreen pines. A rocky seashore with epic ocean views — these are just a few snapshots you could take in Oregon. With the Pacific Ocean on one side, the Columbia River to the north and the Cascade Range on the horizon, the Beaver State abounds with natural attractions. When the Lewis and Clark expedition reached the coast, William Clark proclaimed it to be one of grandest places he’d seen.

On the west coast, the azure waters of the Pacific Ocean crash into rocky bluffs and sandy beaches. Explore the area around Haystack Rock on the central coast for a quintessential beach experience. Accessible only during low tide, the iconic monolith rises 235 feet above the surface. Look for tide pools to see the colorful flora and fauna, including starfish, sea anemone and more. In spring and early summer, you might spot the comical tufted puffins that come to Haystack Rock to nest. No matter where you land on the Pacific coast, you’ll find exquisite views with several public beaches and state parks. 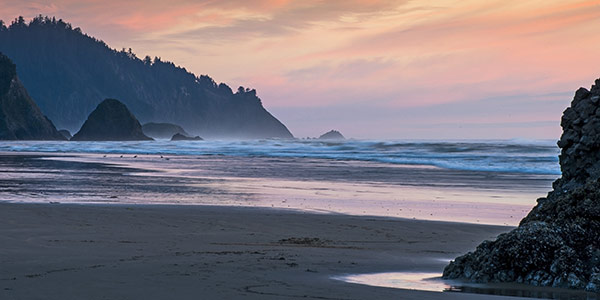 The Columbia River forms the northern border between Oregon and Washington. Stunning vistas lurk where the river winds its way through the Cascade Range, forming a giant gorge complete with lush landscapes and cascading waterfalls. The granddaddy of them all is the 600-foot plunge found at Multnomah Falls. A historic bridge traverses the front of the falls, allowing you to look up to the brink and then down into the mist below. Head up to the Vista House at Crown Point for sweeping views, and then journey down into the Hood River Valley to get a taste of the region by purchasing fresh fruits and vegetables at the plethora of farm stands.

The scenery becomes even more stunning at Crater Lake National Park near the state’s southwest corner. The deep-blue waters fill a caldera formed when a volcanic mountain collapsed 7,700 years ago, leaving behind the deepest lake in the nation at 1,943 feet. Green pines and rocky peaks rim the sapphire waters. The 33-mile Rim Drive takes visitors to scenic points and geological features, while ranger-led boat tours take you right onto the waters. 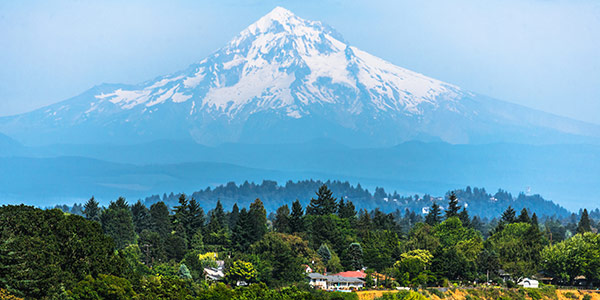 Ninety-five miles east of Portland, snowcapped Mount Hood is an iconic Oregon sight. At just over 11,000 feet, this is the highest point in the state. Thousands of surrounding acres are preserved as national forest lands, offering prime locations for fishing, hiking, canoeing and more. During the winter months, visitors can enjoy the spectacular snowy landscapes while skiing and snowshoeing.

Portland’s natural beauty and hip personality have made it a perennial favorite for travelers. Along the shores of the Willamette River, shimmering skyscrapers rise, but the surrounding mountains and forests make for a superior spectacle. The white peaks of Mount Hood and Mount St. Helens, 69 miles away in Washington, can be seen in the distant horizon on a clear day. Foodies flock to the city for the selection of fine restaurants, cozy cafes and hip food carts. Beer aficionados can take their pick of the world’s largest selection of breweries and microbreweries. The so-called City of Roses is also known for the bountiful blooms found at locales like the International Rose Test Garden. If you feel like experiencing some new flavors, head south of town to the Willamette Valley, home to scores of wineries.

When you cross the Cascades heading east, you’ll discover Oregon’s high desert, marked by sunny days, cooler nights and less rainfall. Bend is known for supreme recreation. Mount Bachelor provides a scenic backdrop for the city and plentiful powder for skiing and snowboarding in winter. For fishing and white-water rafting, head to the Deschutes River.

To experience the best of Oregon, take a drive along the Pacific Coast Scenic Byway. Sweeping ocean views can be found around every turn in the road. Several charming seaside towns dot the coast, from Astoria to Coos Bay. Find a seafood shack to savor freshly caught crab, salmon and oysters. Many lighthouses stoically stand along the coast, offering picturesque scenes to photograph or explore. Near the southern border, coastal redwood forests provide an enchanting experience.

Be sure to have binoculars handy, as you will spot wildlife from the shore. Oregon provides prime whale-watching locales. Thousands of whales pass close to the coast migrating between Alaska and California. Stop at the Whale Watching Center at Depoe Bay to learn more about these majestic creatures. The Sea Lion Caves in Florence are sure to bring a smile to your face as you watch these mammals.

Those seeking outdoor recreation will find plenty of tempting spots along Highway 101, whether it be Oregon Dunes National Recreation Area, the Wild Rivers Coast Scenic Bikeway or windsurfing on Pistol River.