Arizona is home to exquisitely rugged landscapes that shaped the region’s Native American and Old West history. Imagine fiery red rocks rising from desert valleys or the colorful layers of the Grand Canyon ablaze in a sunset. Vibrant flowers straight out of a Dr. Seuss story and giant cacti speckle the terrain, contrasting with rocky mountain peaks looming in the horizon. Now, think of the people who subsisted in the region, finding ingenious ways to live and triumph on the arid land.

The state is also home to a giant meteor crater, the Old West town of Tombstone and the Painted Desert. Native American and Mexican cultural influences add vibrancy to the state’s foods, music and arts. It’s no wonder Arizona continually ranks as one of the most popular vacation destinations. Whether you come for the desert solitude, the larger-than-life national parks or the dynamic urban areas, you’ll find something to love in the great state of Arizona. 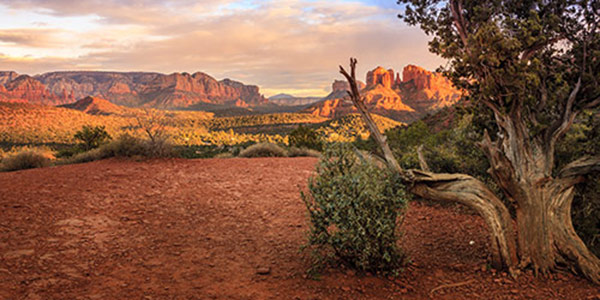 Near the Utah border, the small town of Page is home to big views. Head to Horseshoe Bend to snap an iconic shot of the aquamarine waters of the Colorado River slicing through the red rock canyon walls in a seemingly perfect curve. Nearby, take a guided tour of Antelope Canyon — the red rock canyon walls swirl with sunning grace; it’s no wonder that this is a favorite subject of photographers.

While Arizona boasts plenty of places to get away from it all, visitors also will discover terrific cities with vibrant metropolitan environments. The capital city of Phoenix is the largest in the state, basking in beautiful weather year-round. The smaller cities that surround Phoenix add more selections to the menu of outdoor fun, with activities ranging from Major League Baseball games during spring to biking in the hills. Known as the Valley of the Sun, Phoenix and surrounding communities embody almost all that Arizona has to offer in a relatively small region.

Phoenix’s many diverse attractions give the city a prominent place on America’s cultural map. The massive Musical Instrument Museum takes visitors on a unique audiovisual tour of the sights and sounds of instruments from across the world, and the Heard Museum provides insight into Arizona’s Native American cultures. Visit the Desert Botanical Garden for a compelling view of the region’s plants and flowers. Hitting the greens is a top pick, with Phoenix serving up an abundance of world-class golf courses.

Arizona’s second-largest city, Tucson, bursts with a diverse array of activities set against gorgeous mountains rising on the horizon. Get a feel for the region’s flora and fauna with a stop at the Arizona-Sonora Desert Museum or the Tucson Botanical Gardens, and then step out to explore similar landscapes with a hike in Sabino Canyon. A drive along the Mount Lemmon Scenic Byway leads viewers to some of the most jaw-dropping vistas in the state.

Outside of town, Saguaro National Park showcases its namesake cacti, which tower as high as 70 feet. Explore aviation history at the Pima Air & Space Museum, with an “aircraft boneyard” of obsolete hardware on display next door. South of town, the view of the startling white walls of the historic Mission San Xavier del Bac earned it the nickname, The White Dove of the Desert. Walk the streets of Old Tucson downtown, where a vibrant arts and food scene constitute a visual and culinary feast.

In north-central Arizona, the high elevations in Flagstaff showcase a landscape that differs dramatically from the state’s arid environment. With cooler temperatures in the summer and ample snow through the winter, visitors can enjoy diverse activities in the great outdoors. Explore the ancient pueblos of Walnut Canyon National Monument during the warmer months, and take a visit to the Arizona Snowbowl to enjoy some skiing during the colder months.

With a nickname like the Grand Canyon State, it’s no surprise that Arizona takes great pride in its most distinctive natural landmark. This giant gorge, over a mile deep in some places, attracts more than 6 million visitors a year. Adventurous tourists can experience this dramatic landscape up close with a mule ride down into the depths of the chasm, where you can rest up with an overnight stay at the historic Phantom Ranch. A rafting trip down the Colorado River at the bottom of the canyon is another thrilling adventure. Hiking rim to rim is a journey for the fit and adventurous. The South Rim is a bustling tourist hub with restaurants, hotels and other amenities; the North Rim serves as a refuge for folks seeking a quieter experience.

For a uniquely American Southwest adventure, make a stop in Four Corners, where the borders of Utah, Arizona, Colorado and New Mexico converge. A monument marks the exact point where the lines form a neat cross. Nearby, the iconic rock formations of Monument Valley rise spectacularly into the desert sky. Part of the Navajo Tribal Park, Monument Valley served as a backdrop for countless Western movies, making this region one of Arizona’s most filmed landscapes. Visitors can make their own stories when they visit this and other parts of the Grand Canyon State.

Nestled along Interstate 10 between Tucson and Phoenix, Picacho Peak State Park will dazzle you with its staggering scenery, rich history and abundance of outdoor recreation. Road trippers can cruise along the highway to take in the park’s uniquely shaped 1,500-foot peak, which has served as a guiding landmark for travelers for centuries. Outdoor enthusiasts will want to take advantage of 3,747 acres of hiking trails and rock-climbing areas.

At the foot of the peak, history buffs can walk in the footsteps of both Union and Confederate soldiers in one of the nation’s most fascinating Civil War battlegrounds. In 1862, a group of 120 Confederate Rangers came under attack from a 2,350-man-strong pro-Union column of infantry and cavalry from California. Although the battle had limited influence on the outcome of the war, it has gained distinction for being the westernmost battle in the epic conflict. Today, reenactors continue to skirmish in the shadow of the famous peak.

Approximately 30 miles to the west, Ironwood Forest National Monument encompasses 129,000 acres of mountainous terrain blanketed with ironwood trees. Also growing in the region are saguaro cacti and creosote bush. While you’re here, take a horseback riding lesson, uncover fossils in archaeological sites, and keep an eye out for pronghorn, mule deer and other diverse wildlife.

Just outside Picacho State Park is the Rooster Cogburn Ostrich Ranch. Here, kids will have a blast getting close to cuddly critters by hand-feeding ostriches, fallow deer, parakeets, and miniature goats and donkeys.

The ranch also offers a Monster Truck Tour; guests can ride high above the ground on a lifted vehicle, traversing the rugged terrain for a one-of-a-kind desert experience. For more family fun, head to Biosphere 2 to experience Earth’s diverse ecosystems. From lush rain forests to dusty deserts, this giant glass enclosure and research facility gives you a new perspective on planet’s living systems and its place in the universe.

The sweltering desert temperatures of summer and early fall might keep the community of Quartzsite off the vacation radar for many, but come winter, it’s a haven for gem-loving road warriors.

Located on Interstate 10 about 20 miles east of the California border, Quartzsite entices thousands of snowbirds each January and February with a giant gem show and swap meet, as well as several local points of interest. When this town, known as the Rock Capital of the World, begins the new year, thousands descend upon the area in their RVs to peruse gems, fossils, jewelry and more on display by vendors over an eight-week-long showcase.

It’s estimated that the population of the greater Quartzite region swells to well over 1 million during this time of the year. Whether it’s a prized agate, a chunk of glittering gold, handcrafted jewelry or the equipment needed to bring out the beauty of mined gems, this series of shows and fairs promises something for everyone.

The tradition of rock shows dates back to 1965 and now encompasses eight major consumer shows, including the Quartzsite Sports, Vacation & RV Show, and the Tyson Wells Rock & Gem Show. The Sports, Vacation & RV Show is particularly popular. Billed as “the largest gathering of RVers in the world,” the event entices visitors with nearly every conceivable piece of equipment, upgrade or RV contraption.

If you need a break from the crowds, escape into the desert at the Kofa National Wildlife Refuge and Signal Peak. Hike all day on any of the rugged trails that wind through the rugged desert landscape. On the hikes, you can catch a glimpse of the herd of big horn sheep that call the area home. If you’re a birder, be on the lookout for the white-winged dove, American kestrel or the northern flicker.

What do hummingbirds and wine have in common? If you’re lucky, you’ll experience these things and more on your next trip to Sierra Vista, on the outskirts of the Coronado National Forest in southern Arizona, close to the Mexican border.

Because of its unique climate, diverse habitat, 9,000-foot Mountains and prime location in the San Pedro River Valley, Sierra Vista is the preferred stopover for thousands of hummingbirds that migrate twice every year. Fifteen species of hummingbirds can be spotted zipping over the terrain. The best time to see them is late April and early September. The area’s rich soil has also made it an excellent destination for wineries, and the region has earned the nickname, “Napa-zona.”

Take a Dip in Yuma and Lake Havasu

Perched on the banks of the Colorado River, Yuma has become a popular stopover for fun-seekers. Holding the record for the most hours of sunlight per year, Yuma is the perfect place to go for a lazy tube ride on the Colorado River. This town also is home to a bustling agritourism scene, with several farm-to-table restaurants serving up fresh veggies from surrounding fields.

The party continues about 175 miles north, where Lake Havasu welcomes boaters, anglers and revelers. The town is home to the transplanted London Bridge, which spans a portion of the lake. The festive community also features English Village, a whimsical tribute to all things British.