The Goonies and Lewis and Clark made this coast famous

Flanked by one of the world’s most scenic highways, U.S. Route 101, Oregon’s North Coast is a dramatic collage of rugged shores, haystack rock formations, colossal dunes, historic lighthouses and mile after mile of sandy beach.

On the northern coast, most visitor activity orbits around the towns of Astoria and Cannon Beach, both of which can be visited as day trips from Portland. The Oregon Coast also provides some of the nation’s top wildlife viewing: The region’s signature rock formations provide refuge to healthy colonies of birds, sea lions and seals. Hundreds of gray whales reside in the waters off Oregon’s shores, and thousands more pass through during their annual migrations (late winter and early spring) between the Arctic and the waters off Baja California.

The Tillamook area is a nature lover’s playground, with gorgeous scenery, the famed Three Capes Scenic Loop drive and myriad opportunities for outdoor recreation, including over a dozen hiking trails and more than 800 miles of navigable waters that lend themselves perfectly to fishing, crabbing and kayaking.

Starting from Oregon’s northern border with Washington, here are some highlights of a trip along the Oregon coast, moving from north to south. 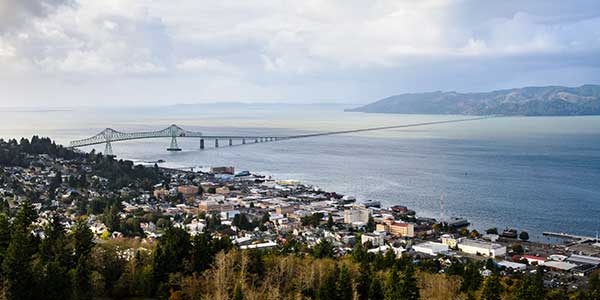 With its historical and popular culture touchstones, Astoria belies its small town status (population 10,000) and thoroughly embraces its cultural cachet as a “little San Francisco.” Founded over 200 years ago, Astoria’s evocative streets are earthy fusions of maritime relics, 19th-century mansions, art galleries and gourmet restaurants. Few towns can lay claim to such a glorious setting. Within easy reach, there are forests laced with hiking trails, the mighty Colombia River, which is famed for its prize salmon runs, and the tempestuous Pacific Ocean, with its sweeping rocky coastline.

History buffs won’t want to miss Fort Clatsop, which forms the start of the 6.5-mile Fort to Sea Trail that follows in the footsteps of the 1803-1806 Corps of Discovery mission led by Lewis and Clark. Astoria has been dubbed “Hollywood North” because of the many films shot on location here. The “Free Willy” and “Goonies” sites can be visited as part of Astoria’s dozen or so famous film locations. Filmed on location here, “The Goonies” planted Astoria in every moviegoer’s consciousness back in 1985; the town hosts its official Goonies Day on June 7. The Oregon Film Museum, housed in the historic Clatsop County Jail, provides a detailed map of seminal Hollywood film locations.

A popular getaway for families, Seaside is known for its mile-and-a-half-long ocean-facing Promenade, lined with shops, restaurants and even candy shops selling saltwater taffy. The city also offers plenty of events throughout the year, from volleyball tournaments to classic car shows.

Just 90 minutes from Portland, the coast at Cannon Beach distills, in many ways, the essence of the Oregon Coast. A dramatic blend of pristine sands, colorful tide pools and coastal outcroppings provide a nesting habitat for myriad seabirds, including tufted puffins. The signature formation is Haystack Rock, which rises 235 feet from the shore’s edge. Within striking distance of Cannon Beach, Ecola State Park encompasses nine miles of stunning coastline perfect for tide pooling, surfing and wildlife watching.

The park is laced with excellent trails. Hikers can take on an eight-mile segment of the Oregon Coast Trail or the more modest 2.5-mile historical Clatsop Loop Trail, which Captain William Clark and 12 members of the Corps of Discovery traveled through in 1806 in search of a beached whale. Ecola is famed for its iconic vistas. A majestic Sitka spruce forest leads to a bluff that delivers jaw-dropping views of the Pacific Ocean with secluded coves and sea stacks rising from a snaking shoreline framed by a ridge of forested mountains.

South of Cannon Beach on Tillamook Bay, beautiful Garibaldi is a quiet port town driven by the fishing industry. There are lots of little shops and restaurants here, and while it’s usually pretty calm, the fourth weekend of July attracts large crows thanks to the annual Garibaldi Days celebration. Events include a parade, free outdoor concerts and plenty of concession stands.

Tillamook is known for its tasty cheeses that are shipped across the country, and most visitors here head straight to the Tillamook Cheese Factory. This self-guided tour gives you a bird’s-eye view of how more than 171,000 pounds of this famous cheese are produced each day. Sample a variety of cheeses on the tour, including the “squeaky” cheese, before heading to the cheese shop for an astounding selection of this dairy product, along with fresh yogurt, sour cream, butter and over two-dozen flavors of homemade, extra-creamy ice cream.

The factory is a cooperative dairy that attracts more than a million foodies each year. During the tour, visitors can watch workers producing and packing cheese.

Despite the heavy foot traffic, cheese fans should be assured of the painstaking measures that Tillamook goes through to ensure quality. Many of the cheeses are aged for as long as three years. If you are a fan of Monterey Jack cheese, it should be noted that Tillamook Monterey Jack has won the best in its class at the United States Championship Cheese Contest. Just north of town, check out the epic Twin Rocks in Rockaway Beach.

Just south of Netarts, Pacific City is a quaint little town with beautiful, wide beaches flanked by large cliffs and is home to Bob Straub State Park, an excellent spot for beachside bird-watching. Visitors to this area’s pristine shores can hunt for a variety of treasures, including sand dollars, hermit crabs and driftwood. A bike path runs through downtown Pacific City, giving visitors easy access to shopping and dining. 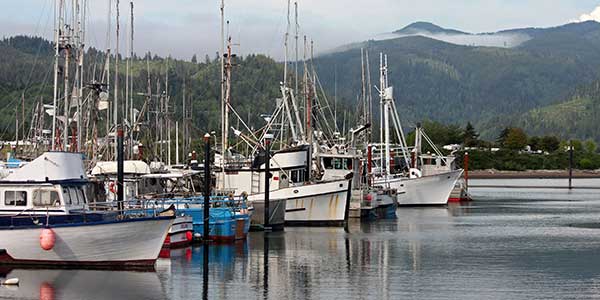 Experienced kayakers can chart a course from one town to the other or revel in the natural beauty of Pacific City by kayaking the five-mile, fast-moving stretch of the Nestucca River from the Bixby County Boat Launch to Three Rivers County Boat Launch. Novice paddlers can convene at the calm and placid waters of the Lake Lytle County Boat Ramp, south of Nehalem Bay, or can embark on a two-mile paddle through tall grasses and beaver lodges at Cape Meares Lake.