Jutting off the northwestern coast of the Evergreen State, just west of Seattle across the Puget Sound, the Olympic Peninsula is a big slice of Washington wilderness punctuated by small towns along its coast. The region’s beautiful, temperate rainforests have gained worldwide recognition, and its charming communities boast delightful seafood restaurants, Victorian buildings and museums focused on Native American history. Add ample opportunities for deep-sea diving, kayaking and fishing to the mix, and it’s no wonder why this part of Washington is a favorite among RV travelers in the know.

Within the region’s 3.5 million acres is Olympic National Park, replete with forests and the Olympic Mountains, crowned by the peak known as Mount Olympus. Directly to the south of the park lies the Olympic National Forest, complete with lush meadows, deep canyons and winding nature trails that lead to everything from waterfalls to fantastic views of Lake Quinault.

A 40-minute drive from the Olympic Park Visitor Center in Port Angeles will get you to the summit of Hurricane Ridge, which offers stellar vistas of the surrounding mountains and the Strait of Juan de Fuca.

Mt. Walker, on the eastern side of Olympic National Forest, provides unmatched views of Puget Sound, Mt. Rainier, Mt. Baker and the Cascades. The summit road begins a few miles south of Quilcene (near the Hood Canal) on Highway 101.

Perhaps the biggest draw of the Olympic Peninsula is its mile upon mile of temperate rainforest. Spanning the area’s low-elevation valleys, these ecosystems are home to a wide variety of epiphytes (plants that grow off other plants), including ferns, lichens and mosses that add a thick and dense green hue to the rocks and trees found throughout the region.

Hikers trekking through these environments — particularly the Hoh Rainforest, on the northwest edge of the park, and the Lake Quinault Rainforest to the south in the national forest — pass by gorgeous old coniferous and deciduous trees, with lots of Sitka spruce and western hemlocks, some of which are many hundreds of years old. The forests here are also habitat to a wide variety of bird and mammal species, including barred owls and huge populations of Roosevelt elk.

These rainforests usually get around 12 to 14 feet of rain throughout the year, and while temperatures rarely drop below freezing or climb above the 80s, these verdant zones are most pleasant in the summer and autumn months. It’s also during this time of year that the rainforests get the most hikers. 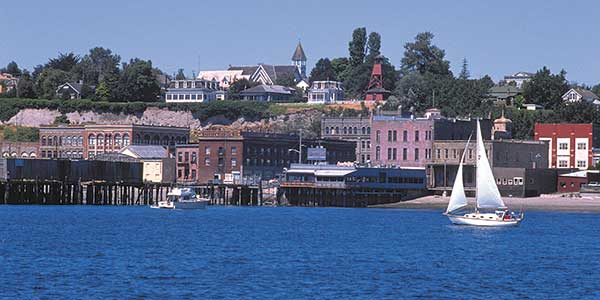 Several charming port towns fringe the coast of Olympic Peninsula, each with its own unique character. On the peninsula’s northeast region, Port Townsend has gone to great lengths to preserve its Victorian roots, putting many of its buildings on the National Register of Historic Places. Popular attractions include the Rothschild House, a century-old structure with original period decor and furnishings.

A host of private Victorian homes likewise grace Port Townsend’s uptown. Don’t miss Fort Worden State Park, a former army fort that’s home to the Commanding Officer’s Quarters, a 1904 officer’s home full of beautiful period furnishings and artifacts. West of Port Townsend is the Dungeness spit, a 5.5-mile sand spit that juts out into the Strait of Juan de Fuca. The sandy walk is a challenge to hikers, but the long trudge rewards explorers with scenic views.

Port Angeles, west of Port Townsend on the peninsula’s north coast, sees lots of visitors passing through en route to Victoria on Canada’s Vancouver Island (a ferry connects the two cities). The town has a pleasant waterfront lined with boutiques and restaurants along with more than 38 outdoor sculptures. It’s also an access point for a 25-plus-mile portion of the Olympic Discovery Trail, which leads all the way to the nearby town of Sequim to the east. Farther east, Port Ludlow is another worthwhile stopping-off point, with easy access to the Olympic National Park and several attractions of its own, including 26-plus miles of trails, a marina with kayaks and stand-up paddleboards and an 18-hole championship golf course.

The Strait of Juan de Fuca

If you’re looking for a lovely drive through the region, the Strait of Juan de Fuca Scenic Byway, State Route 112, is your ticket. This route travels along a stunning stretch of coastline and forest, starting just west of Port Angeles and continuing clear up to Neah Bay, the northwesternmost point in the contiguous United States.

Popular stops along the way include Freshwater Bay County Park, a hot spot for kayaking and wildlife spotting, and the Salt Creek Recreation Area, with great hiking opportunities and lots of tide pools. Nearby Fort Hayden even features some World War II bunkers.

Head inland to Lake Crescent, a glacially carved body of water offering a cool, idyllic spot for swimming, boating, camping and, naturally, fishing. Lake Crescent also has several beaches and a trail leading to a favorite swimming spot known as Devil’s Punch Bowl. Jumping off the low, arching bridge that spans the water here is a favorite pastime. Another trail leads to Marymere Falls, one of 26 spectacular waterfalls along the Olympic Peninsula Waterfall Trail. 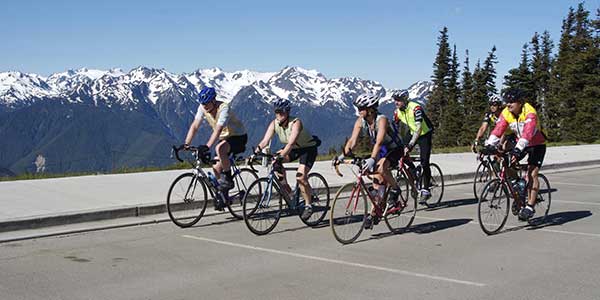 Outdoor attractions further west include Sadie Creek, popular with mountain bikers, and Clallam Bay, with boat launches and lots of dive shops.  Get great photos posing near the statue of the area’s mascot, Rosie the Walking Fish, which overlooks Clallam Bay from the nearby town of Sekiu.

At the end of the scenic route sits Neah Bay and the Makah Reservation, with lots of deep-sea diving opportunities as well as plenty of fishing — it’s a great place to catch halibut as well as cod, salmon and sea bass. Many visitors make a point of hiking out to Cape Flattery, a short 0.75-mile hike with four observation decks and great ocean views.

For those with an interest in local tribal culture, the Makah Museum displays artifacts retrieved from the nearby Ozette Archaeological Site along with a rotation of temporary exhibits focusing on clothing, photographs and indigenous arts. If you happen to be visiting in late August, the annual three-day Makah Days features traditional and contemporary activities, including traditional dancing, salmon bakes, a street fair with native arts and a 3-mile uphill race.

Southeast of Neah Bay lies Forks, a great basecamp for exploration of the inland forests. With its mystical ambience and idyllic forested landscape, the Forks area is known as the setting for the “Twilight” movie franchise. Check out the Forks Timber Museum, which showcases exhibits focused on the area’s legendary lumber industry. Directly west and on the coast, at the western edge of Olympic National Forest, La Push is one of the top surf spots on Washington’s coastline.

Second Beach, just east of LaPush, is popular among photographers and sightseers. This shore is reached by way of a .7 mile forested trail. The reward for the hike? A pristine 2-mile-long stretch of beach, with beautiful seastacks that call out to be photographed.

Named after intrepid President Theodore Roosevelt, the large and powerful Roosevelt Elk makes its home on the peninsula. The best place to spot this beast is in the park’s Hoh Rain Forest, where the mammals enjoy breakfast, lunch or dinner among the rain forest’s ferns, shrubs and lichens. Roosevelt himself established his hoofed counterpart as a protected species in 1909.