If the world seems volatile now, imagine what it must have been like 50,000 years ago, when a flaming meteor traveling roughly 26,000 miles per hour slammed into the earth near modern-day Winslow, Arizona. Meteor Crater is a fascinating and popular attraction that’s considered to be the best-preserved meteor impact site on the planet. The museum built at the very edge of the crater sheds light onto the cosmic collision and shares compelling findings about space made by astronauts and scientists.

While in the neighborhood, a trip to the Route 66 town of Winslow, just 25 miles to the east, offers more earthly delights. Made famous when the town’s name was dropped in a 1972 Eagles song, Winslow takes visitors back in time, when railroads and hotels heralded the development of the American Southwest.

Peering into the Big Pit

At nearly 1 mile across and more than 550 feet deep, Meteor Crater can be viewed and understood through outdoor observation trails and a visitor center on the crater’s rim that features indoor viewing facilities, an interactive discovery center and a wide-screen movie theater. A film features 3-D modeling and animation that lets viewers experience the sound and sights of a meteor’s impact. 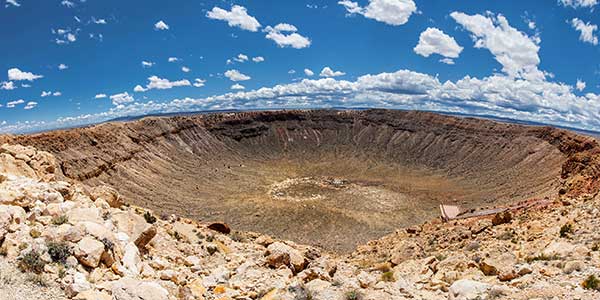 Take it Easy in Winslow

Nearby, Winslow invites visitors to stop over and explore its homey community, which exudes history from the 19th and 20th centuries. Local attractions include the Hubbell Trading Post, a distinctive earthen-brick building once considered the preeminent trading post company in the Southwest. The building now houses the visitor center.

Winslow is forever enshrined in pop culture history thanks to the Eagles’ hit FM song, “Take It Easy.” The tune contains the memorable verse, “Standing on the corner in Winslow, Arizona, such a fine sight to see/It’s a girl, my lord, in a flatbed Ford slowing down to take a look at me.” This Route 66 intersection is a photo opportunity for thousands of visitors, with its mural of the girl in the Ford truck and a life-sized bronze statue of a young man clutching a guitar.