Calling itself “America’s Finest City,” San Diego is vibrant, multicultural and laid-back, with beautiful beaches, excellent museums, and lots of family-friendly attractions. With about 1.3 million residents, it’s the second-largest city in the state, but it doesn’t feel nearly as sprawled out as places like Los Angeles, and the public transportation system here extends all the way to the Mexican border.

The Spanish colonized San Diego in the 16th century, and its Iberian influences are evident in much of the city’s old mission-style buildings, particularly in the historic Old Town. San Diego also has one of the country’s oldest public recreation areas—Balboa Park—a 1,200-acre expanse of fountains, palm trees, green spaces and some of the city’s best-known attractions, including the Museum of Man and the San Diego Zoo.

Beach lovers will find plenty of sandy space to keep them happy—this is Southern California, after all. Just northwest of the city center at the estuary of the San Diego River, Ocean Beach is a cute coastal neighborhood with lots of little surf shops, cafes and restaurants and a bit of a bohemian vibe that has kept major resorts and chain shops from taking over the area, making it an ideal spot for experiencing California’s classic beach culture to this day. A 20-minute drive north of Ocean Beach, La Jolla is a more upscale alternative, with lots of boutiques and art galleries and fine-dining restaurants.

In the San Diego-La Jolla Underwater Park, four distinct habitats are visible—rocky reefs, kelp beds, sand flats and underwater canyons—which are revealed more fully through snorkeling or scuba diving. Get an up-close look at more marine wildlife in Birch Aquarium, part of the Scripps Institution of Oceanography. Here, guests can get to know the residents of a tide pool through interactive exhibits, and watch aquarium staff feed the many residents, including a loggerhead sea turtle.

Head out into the open ocean for a day of dolphin or whale watching with any of several tour companies. Gray whales, humpback whales, fin whales and blue whales travel through these waters at different times during the year.

Sports fans may be aware that the city has two major-league pro teams: the San Diego Chargers (NFL) and the San Diego Padres (MLB). The city also hosts the Farmers Insurance Open, part of the PGA Tour’s “West Coast Swing,” held annually in January at the city’s Torrey Pines Golf Course. The city is also home to the San Diego Hall of Champions Sports Museum, the largest multi-sport museum in the country, a three-story complex full of sports memorabilia.

History lovers will appreciate the city’s historic Old Town, a gorgeous neighborhood at the intersection of Interstate 5 and Interstate 8 that’s full of beautiful and historic mission-style buildings, lots of excellent restaurants (many with great Mexican food), a theater and plenty of quaint shops.

Weekends are an especially good time to visit, when local craftspeople descend upon the Old Town Harney Street Market to sell their wares. Other popular special events include the annual Cinco de Mayo celebrations (held on a weekend closest to May 5), a Day of the Dead festival, and the annual Taste of Old Town, which is dedicated to highlighting the neighborhood’s culinary specialties.

San Diego is also home to one of the missions established in the 18th century by the iconic Spanish priest Father Junipero Serra. Still standing is the Mission Basilica San Diego de Alcalá, California’s first mission church. The mission was founded in 1769; today, it still serves an active congregation. Over the years, it has been renovated to resemble its 18th-century grandeur. 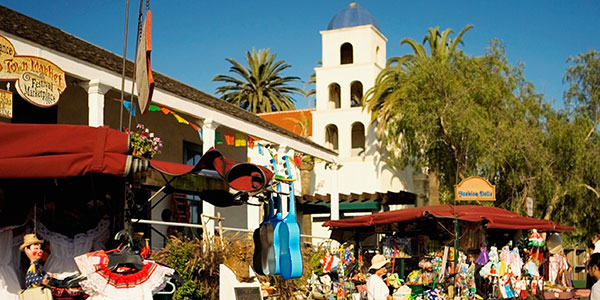 Lovers of nautical history can visit the Maritime Museum of San Diego. Located on San Diego Bay aboard the Berkeley, a century-old steam ferry, this repository of the seafaring past provides a look into the forces that shaped San Diego’s role as a major harbor. Moored adjacent to the museum are vintage ships that sailed the coast from the state’s early days all the way to the Cold War.

Among the vessels in the collection is a replica of the San Salvador, which sailed into San Diego Bay in 1542 and was captained by explorer Juan Rodriguez Cabrillo. Roam the museum’s galleries and marvel at the intricate models of famous ships. You can even take a tour of the San Diego harbor in a vintage craft with a helpful guide at the helm.

Eager for even more San Diego seafaring history? To get a sense of the U.S. Navy’s role in World War II and subsequent conflicts, step aboard the USS Midway, anchored in the San Diego harbor. The largest ship in the world when she was put to sea in 1945, more than 225,000 sailors served on the aircraft carrier until it was decommissioned in 1991. The USS Midway is now the country’s most-visited naval ship museum, with 29 restored aircraft and two flight simulators to allow landlubbers a chance to “ride” in a fighter jet cockpit.

If you have one day in San Diego and want to cover a lot of ground, Balboa Park just off the Interstate 5 at Park Boulevard, is your best bet. This centrally located park houses many of the city’s major attractions. The Museum of Man, the city’s famous anthropology museum, has a large collection of artifacts from around the world, and even has mummies on display. It’s housed in the park’s iconic California Quadrangle, a set of structures that were erected in the park a century ago for the 1915-16 Panama-California Exposition.

The park is also home to the San Diego Air and Space Museum, an affiliate of the Smithsonian, which is full of historic aircraft and spaceships. There’s even an authentic GPS satellite on display. Other features include flight simulators, a 3D/4D movie theater and an area especially for kids.

The San Diego Art Institute is a 10,000-square-foot exhibition space with a rotation of shows by local artists and a great gift shop for those who want to take home a piece of art or jewelry of their own. 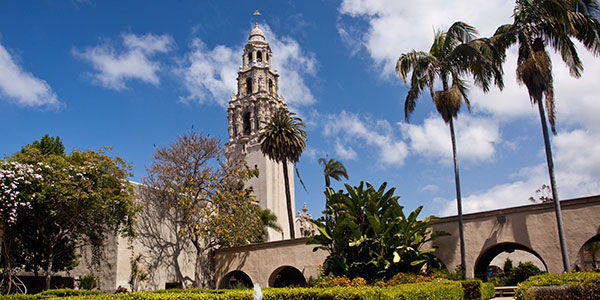 Auto lovers and anyone with an appreciation for the good old days won’t want to miss the San Diego Automotive Museum, which has nearly 100 historic motorcycles and cars, including Louie Mattar’s 1947 custom Cadillac, a modified auto that Mattar and two companions drove from San Diego to New York—and back —without a single stop!

Other museums in the park include the Natural History Museum, the San Diego Museum of Art, the Veterans Museum and the San Diego History Center. And no visit to Balboa Park—or San Diego, for that matter—would be complete without a stop at the city’s best-known attraction, the expansive San Diego Zoo. This world-famous zoological institution is the permanent residence of thousands of animals from around the world, including creatures not commonly found in most American zoos, such as giant pandas and Tasmanian devils. There’s also an aerial tram that runs across the zoo as well as buses and moving sidewalks that help make the expansive property easier to navigate.

Just north of San Diego on Interstate 5, Del Mar offers great horse racing action. Advertised as the place where “the surf meets the turf,” the Del Mar Thoroughbred Club caters to horse-racing enthusiasts just a short distance from the Pacific Ocean. Lay down your bets on a fast horse and watch the action as it circles the track.

Closer to downtown, Little Italy celebrates and preserves the traditions of the “old country.” Food, music and film are celebrated annually, with festivals that pay homage to the Italian Culture.