In 1946 after World War II my father, Clarence Hall of Crawford, Oklahoma was told by his sisters, who worked in the shipyards near San Diego that he should come to California because jobs were plentiful.

My dad was a farmer & had 4 small children. I was 5. Dad was a good farm mechanic & blacksmith. He had a 1934 Model Chevy car. He tore into the old Chevy with a hacksaw & cold chisel & cut the Chevy right behind the windshield. He started lengthening the frame & added a drag axle made from the front axle of a 28 Model Pontiac, that meant two different spare wheels.

He heated the frames in a forge & riveted them together after he punched holes in both frames. He put only one door on the passenger side about midway of the camper body that was built on the car & extended frame. He tied it into the car’s windshield & installed windows on both sides so he could see the traffic.

The camper was made out of Masonite siding & aluminum tin roof. Mom had a 3-burner kerosene stove with an oven that she set on one burner. We had a kerosene heater for heat.

We left Oklahoma late fall of 1946 following Route 66 & arrived in Madera California, ( The Land Of Milk & Honey! ) by the time we got to California the jobs were all taken up that Dad was qualified for so he ended up gathering eggs at a large chicken farm.

We spent Christmas in Madera & Mom was expecting my brother & wanted to go home. Dad was getting disgusted with not finding a mechanic job & wanted to get back to the farm too. So Oklahoma here we come!

Somewhere between Needles California & Kingman Arizona the old Chevy’s transmission got to jumping out of second gear. This was a 3 speed on the floor with an old babbitt beating 87 horsepower 6-cylinder engine. This was a long old climb & not enough horsepower to keep it in high gear so Mom had to hold the old car in second gear. When Mom got too relaxed it would jump out of gear.

Around Kingman Dad stopped & made camp. He crawled under the old car & pulled out the transmission & took Mom’s kerosene stove & cast iron skillet & poured a babbit bearing for the input shaft. Whittled it out to fit the shaft together
It was windy & unbearably cold up on the mountain. We had just gotten into bed & the wind was shaking our camper. We heard the darndest noise & banging outside the camper. Mom got scared & made Dad go out & check. He came back in Laughing. Little mountain burros were trying to gather around our camper to keep out of the cold & wind.
We made it back to Oklahoma for the birth of my brother on Feb.15,1947.

<em>Submitted by Calvin M Hall of Ulysses, KS as a part of the RV  Centennial Celebration “Share Your Favorite RV Memory” contest. 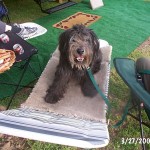