Originally stemming from a need to weather the volatile ups and downs of a fledgling 19th-century mining economy, gambling in Reno started underground, and illegal. But that changed swiftly when, in 1931, the state legalized casinos. What soon became known as the “Biggest Little City in the World” never looked back.

Today, visitors to Reno and its sister city of Sparks will find a surprisingly family-friendly atmosphere, packed with attractions for kids as well as adults. Like Las Vegas further south, Reno has blossomed well beyond its reliance on gambling to attract visitors from far and wide.

Once you’ve had your photos snapped in front of the famous Reno Arch (spanning Virginia Street at the corner of Virginia and Commercial Row), head over to the newly opened Reno Tahoe Visitors Center and pick a self-guided tour map. Use it to stroll the historic downtown core at your own pace before diving into a whistle-stop tour of the major attractions. 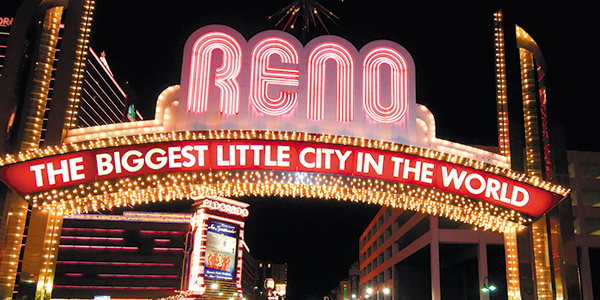 If you are, in fact, travelling with kids, then a trio of family fun centers will no doubt catch your eye. Atlantis, Boomtown and Wild Island each offer swaths of cutting-edge video and arcade games, as well as a litany of miscellaneous highlights, such as mini-golf at Boomtown and go-kart racing at Wild Island.

Two other popular spots for families are the Sierra Safari Zoo and the Animal Ark Wildlife Sanctuary. Both are located less than 25 miles north of downtown Reno, and each offers visitors a chance to meet, feed and interact with hundreds of exotic animals, including bears, wallabies, monkeys, lions and wolves.

When you’re ready to flex some of your intellectual muscles, head to the Nevada Museum of Art, situated directly in the downtown core. Docent-led tours are offered for art history aficionados, but even the most casual of observers will enjoy spending a few carefree hours wandering through the museum’s four thematic sections. All told, the museum displays more than 2,000 works from the 19th and 20th centuries at any given time.

In a similar vein, the Wilbur D. May Center (just a few blocks to the north, near the edge of Rancho San Rafael Park) is a must-visit for history buffs and art lovers. Its massive private collections are especially eclectic. Reflecting the world travels and priceless artifacts collected by ranching tycoon Wilbur D. May, the exhibits range from Tang Dynasty pottery and ancient African artwork to Greek sculptures and Italian amulets.

Also part of the May Center is a massive botanical garden that showcases the plants and animals that live in the ecological transition zone that bridges the Sierra Nevada Mountains with the Great Basin Desert.

The National Automobile Museum is the final piece of the must-visit-museum trifecta. Easily one of the most popular attractions in all of Reno (it’s been voted one of the five greatest automobile museums in the country), the Automobile Museum displays more than 200 classic and special-interest cars ranging from vehicles used in World War II to those used at the dawn of auto racing.

If you’re visiting in September, don’t miss the Great Reno Balloon race, which sees scores of colorfully designed hot air balloons ascend skyward for the win. Equally spectacular are the colorful watercraft that grace the surface of nearby Lake Tahoe. From the Tahoe Queen paddleboat to the Thunderbird Yacht, you’ll be dazzled by the sights found on this grand body of water. 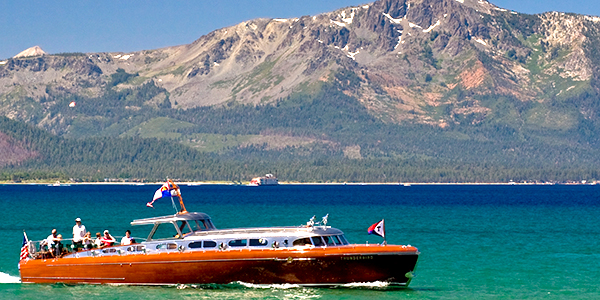 When it’s time for a dose of fresh air, nearby Sparks is a popular spot for anyone looking for a bit of outdoor fun and relaxation—without needing to trek far into the surrounding backcountry.

Rock Park, located along the Truckee River in Sparks, features premier white-water rafting, kayaking and tubing adventures. And Sparks Marina Park, with its 80-acre lake, is the go-to spot for swimming, boating, fishing and even scuba diving.

Visit Sparks in summer for the Best in the West Nugget Rib Cook-Off. Watch top barbecue chefs cook up mouth-watering cuts of meat, then sample the results of their labor.

Travel back in time and experience railroad history at the Sparks Museum and Cultural Center. Here, you’ll find a vintage steam locomotive, a cupola caboose and Pullman executive car. Also on display is a one-room Glendale Schoolhouse and a monument to the Chinese rail workers who helped build the American West.

Finally, if you’re visiting the Reno-Sparks area during the summer months, aim for the infamous Hot August Nights festival in August. Every year during the first week in August, the streets of both cities travel back in time to the golden post-war era of muscle cars, rolled-up T-shirt sleeves and the first forays of rock ’n’ roll.

Like Las Vegas to the south, Reno has evolved well beyond its roots as an edgy desert destination for gamblers. A downtown core packed with world-class restaurants, shops and hotels makes it a great place to visit and explore without ever throwing a pair of dice or pulling a slot lever.