Discover the thrills behind the bright lights

Las Vegas has come a long way in eight and a half decades. From sporting just a single paved road in 1931 to becoming the undisputed entertainment capital of the world (now home to more than 130,000 hotel rooms) the city has witnessed an almost unprecedented evolution and transformation—both on a technological and philosophical scale.

Long gone are the old Wild West-inspired days of boozy Sin City, when organized crime and dangerous racketeering outfits were in their heyday. Today, the Strip is lined with glamorous casinos, luxury hotels and family-friendly attractions that have made the city as renowned for its world-class shows and live entertainment as it is for its ocean of blackjack tables and glittering slot-machines.

Look no farther than Fremont Street, one of the city’s oldest thoroughfares and easily its most iconic.

Once the center of old Las Vegas and home to the city’s classic suite of shady high-roller casino properties, Fremont is now a buzzing hotbed of world-class restaurants, high-end boutiques and miscellaneous attractions. Gluing it all together is the world’s largest video screen—Viva Vision—a 1,500-foot-long (by 90-feet-wide) display sporting 12.5 million LED lights. It bursts with free light shows nightly.

Fremont is also home to newly opened SlotZilla, a combination zip line and thrill ride that runs from the mouth of the world’s largest slot machine. By buckling in for a ride, brave guests can zip their way down the entire length of Fremont—just beneath the flashing lights and displays of Viva Vision—in mere minutes.

Adrenaline junkies will also want to take a trip to the top of Stratosphere Tower. Here, the world’s highest thrill ride begins on the 108th floor and rockets straight up for a series of controlled free-fall descents. Of course, if floating weightlessly over the desert and then falling rapidly toward it isn’t quite your kettle of fish, be sure to still pay a visit to the Stratosphere’s Observation Deck. At 1,149 feet, it offers truly mesmerizing views of the surrounding cityscape and desert. If that’s not enough, take a spin on the 550-tall High Roller, which is billed as the largest observation wheel in the world. 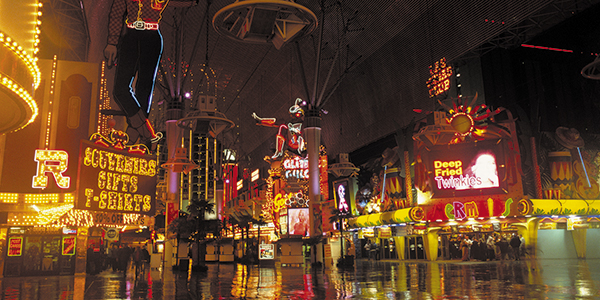 If you’re traveling with kids, the Shark Reef Aquarium at Mandalay Bay is one of the more rewarding experiences. Spanning 14 exhibits and featuring more than 2,000 animals, plan to spend (and enjoy) a significant amount of time here. The experience includes a massive underwater jungle environment—complete with sunken shipwreck—home to not only sharks, but also crocodiles and an 8-foot long Komodo dragon.

History buffs won’t be disappointed here either. The Nevada State Museum at Springs Preserve features the massive skeletal remains of an ice-age wooly mammoth, the imprints of a 225-million-year-old ichthyosaur and myriad cutting-edge displays telling the story of Las Vegas from prehistory to modern times.  The Origen Museum at Springs Reserve brings the desert ecosystem to life with interactive exhibits that will thrill visitors of all ages.

Of course, since Las Vegas beats to a slightly eclectic drum, some of its very best museums follow suit. Of particular note, don’t miss the National Museum of Organized Crime and Law Enforcement (also known more simply as “The Mob Museum”) and the Neon Museum, home to more than 150 classic buzzing signs culled from the history of the Strip.

When it’s time for a break from the bright lights and big casinos, a range of worthy day-trips are on offer.

Outside of Glitter Gulch

And no first-time visit to Las Vegas would be complete without a hop, skip and a jump over to the mighty Hoover Dam. Just 34 miles to the southeast, a drive to the Hoover Dam and a stop for lunch at nearby Boulder City makes for an easy day-trip for families traveling with kids.

Situated on the border between Arizona and Nevada in the Black Canyon of the Colorado River, this 726-foot-high structure will take your breath away. Take a tour of the power plant and dam, which was built in 1931 and features elaborate Art Deco designs on the spillways, four towers and power plant. You can also opt to simply cross over the dam to take in the views.

There are two guided tours: the Dam Tour lasts about an hour, while the Power Plant Tour is only about 30 minutes long. Either way, you’ll want to plan your visit so that you have at least two hours for your entire visit to ensure you get to see everything there is to see. The Visitor Center also offers air conditioning, which is much sought-after, especially in the scorching-hot summer months. Get to the dam early in the day, since pedestrians are not allowed on top of the dam after dark.

The small town of Searchlight is another day trip that’s worth taking. Located less than an hour south of Vegas, Searchlight is a charming community with several eclectic attractions for lovers of Southwest culture and water recreation.

Searchlight was a rugged gold-mining town until the construction of the Davis Dam across the Colorado River in 1951. This created Lake Mohave, which immediately summoned vacationers from Southern California. Today, no beacon is needed to find the recreational opportunities around Searchlight, a tiny enclave of about 500 that services campers, boaters and outdoor explorers. Cottonwood Cove on the lake, about 14 miles to the east, is renowned for its largemouth bass.

There are no stoplights to impede traffic through town on Route 95. On this strip, you can find some small casinos and the eclectic Jack’s Trading Post. Down Cottonwood Road, the small Searchlight Historic Museum has an outdoor mining exhibit and keeps the flame burning for past famous residents, including silent movie stars Rex Bell and Clara Bow. The couple founded the Walking Box Ranch, which is now in the National Register of Historic Places. Also honored in the museum is Edith Head, Hollywood costume designer who won a record eight Oscars. Head spend much of her childhood in Searchlight. Also highlighted at the museum is the region’s colorful gold-mining history.

Hikers have long marked Searchlight on their bucket list maps of places to visit. Spirit Mountain south of town is 5,600 feet of craggy nooks and crannies that were sacred to the desert peoples of the Colorado River. The pygmy forests of pinyon pines and junipers give the access road its name: Christmas Tree Pass. Several routes of varying difficulty ascend the garden-like granite peak that is the high point of the surrounding Newberry Mountains. From the top, views stretch to the Mojave National Preserve in the west to the Colorado River to the east. 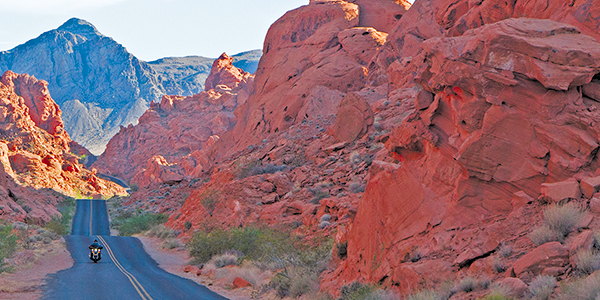 Back in Vegas, don’t forget to pay homage to “the King.” Graceland Presents Elvis: The Exhibition features a permanent display of Elvis Presley memorabilia that tells the story of one of music’s most dynamic pioneers. Follow Elvis’s life as a child in Tupelo, Mississippi, and retrace his rise to stardom.

Exhibits include Elvis Mania, which covers the 1956 recording of his first album and his groundbreaking appearance on the Ed Sullivan Show; Elvis in the Army, which examines his brief hitch as a soldier based in Germany; Graceland, following Elvis’ purchase of a 17,000-square-foot property on 13 acres in Memphis, Tennessee; Elvis in Hollywood, a filmography of the star’s silver screen performances; and Elvis in Las Vegas, which pays special attention to his explosive performances in America’s gambling capital.

The Elvis on the Road exhibit explores the King’s legendary love of cars. In his lifetime, the singer purchased more than 200 vehicles.

If you don’t consider yourself “a Vegas person,” think again. Whatever your taste, pace or entertainment preference, Las Vegas has a custom tour itinerary waiting for you in a dozen different flavors. Two of the most rewarding activities are simply strolling the Strip after dark—taking in the bright lights and ogling at the mesmerizing architectural displays of each major casino—and hopping happily from gourmet buffet to gourmet buffet. Take a break from gambling and let your eyes take in the splendor.