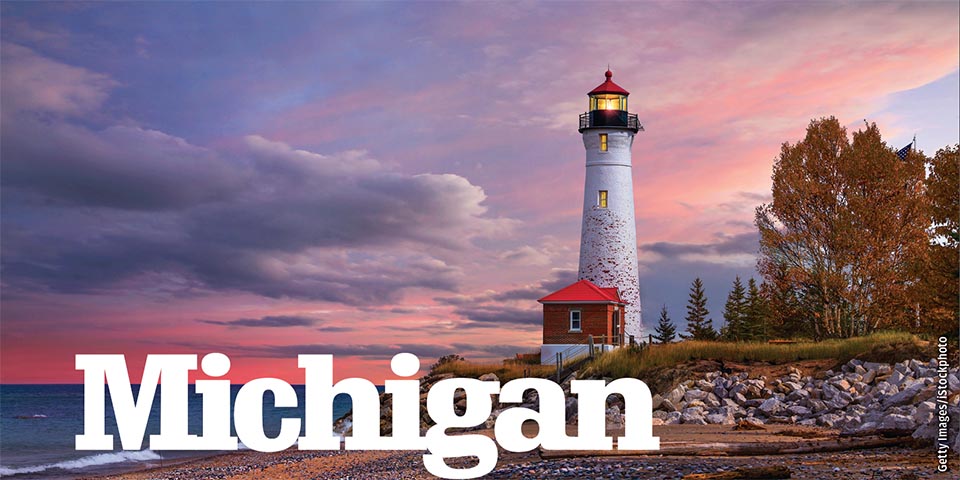 Michigan has more coastline than any state in the Lower 48 and has the longest freshwater coastline in the whole country. But if you prefer dry land, several amazing cities and towns dot the state.

Who needs oceans when you have the Great Lakes? Surrounded by lakes Michigan, Superior, Huron and Erie, visitors will find no shortage of fun. Paddle along the coast for epic views of cliffs or take a long-range fishing excursion.

On Lake Michigan, Sleeping Bear Dunes National Lakeshore is a top pick for families, with a variety of accessible adventures to be found amid the massive sand dunes. One of the dunes has been measured at more than 400 feet tall. Considered one of most scenic spots in North America, Sleeping Bear Dunes features a gorgeous, sandy shoreline and stunning views over expansive Lake Michigan. There’s a ton to do here, from hiking up to the viewpoints at Pyramid Point to learning about arts and culture at the area’s many museums. The Interlochen Center for the Arts hosts performances throughout the year, and Leelanau Sands Casino offers slots, card games and even bingo. 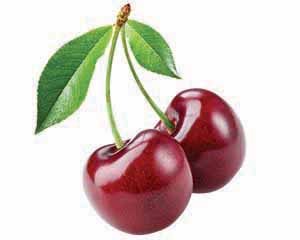 One of the country’s leading cherry producers, Michigan harvests around 90,000 tons of this delicious fruit each year. In fact, cherries are so popular here that they’ve become a part of the fabric of everyday life. You’ll find them at roadside stands and farmer’s markets, not to mention in pies and other desserts across the state. The cherry on top? They’re one of the healthier snacks around, so having your fill is a guilt-free affair.

Beyond the Great Lakes

Feeling overwhelmed by the Great Lakes? Head inland and discover an array of smaller bodies of water that will amaze you. While Lake St. Clair and Hubbard Lake are top picks for freshwater fishing and boating, the state has 11,000 other lakes to choose from. Pick up a paddle or a rod and head to the Au Sable River, notable as a National Wild and Scenic River. Running through the Huron-Manistee National Forests, this waterway offers exceptional scenery and trout fishing.

As its name indicates, Pictured Rocks National Lakeshore is a visual feast. Striking standstone cliff faces and gushing waterfalls make this a top photo op along the coast of Lake Superior on the north shore of the Upper Peninsula. Even further north, near the shores of Ontario’s Thunder Bay, Isle Royale National Park preserves tranquil isolation on a forested island.

From its rise as capital of the U.S. automobile industry to its role in shaping the Motown sound, Detroit has helped define American industry and culture. Michigan’s largest city has seen its ups and downs, but visitors will find much to explore in the Motor City. A thriving arts and theater scene finds expression in multiple venues, including the renowned Detroit Institute of Arts and the Fox Theatre. Belle Isle Park, located in the Detroit River, is a refuge for city dwellers, a short distance away from Canada. Just outside of town in neighboring Dearborn, visitors will find the Henry Ford, an indoor and outdoor museum complex dedicated to the auto titan’s story.

On the western side of the state, Grand Rapids is a gem of a city. This town rises above a great waterway, the Grand River, and although it’s the second-largest town in the state, it retains a small-town friendliness.

A Taste of the Old Country

In southwestern Michigan on the coast, a small community preserves the customs of old Europe. Holland borrows plenty of elements from its Netherlands namesake. Dutch-inspired attractions include a tulip farm, a windmill and Neil’s Dutch Village, a reproduction of a 19th-century Netherlands village, complete with a giant wooden slide in the shape of a shoe. It’s also the location of one of the most visited state parks in Michigan, Holland State Park, with scenic beaches on Lake Michigan. Check out the Big Red Lighthouse overlooking the lake and enjoy the beautiful sunsets over the water.

Also on the west coast, the town of Silver Lake offers a healthy dose of adrenaline. Head over to the Silver Lake Sand Dunes, known for its 2,000-acres of undulating, sandy terrain. Hit the gas in the off-roading northern section (with rentals available), go sandboarding in the middle section or let an experienced guide do the driving in the southern section. While in town, don’t miss the Little Sable Point Lighthouse in the nearby town of Mears. Visitors can even ascend the 130 steps to the top in summer months.

Manistee’s rich history is rivaled only by opportunities for hiking in lush surrounding trails. The downtown area’s 27 historic sites can occupy your whole day. Be sure to stop off at the Manistee County Historical Museum, where elegant Victorian antiques sit on display. The city’s historic trolley tours feature guides dressed in period garb.

Cars are prohibited on the quaint Mackinac Island, located on Lake Huron and accessible via a 16-minute ferry ride. Horse-drawn carriages and colorful cruiser bicycles are the best ways to glide down the village streets. Treat your sweet tooth to a piece of candy heaven at Murdick’s Fudge, which has been serving its confections since 1887.

Built in 1880, the majestic Grand Hotel serves as the island’s centerpiece, with its front porch considered the largest in the world. Relax in one of the scores of rocking chairs as you take in the views of sprawling Lake Huron. The elegant structure has 385 suites and rooms, and is surrounded by lush landscaping, with more than 5,000 geraniums flourishing in rich soil.

Located on Lake Michigan’s Little Traverse Bay, Petoskey is packed with recreation possibilities for adventurous RVers, from fishing to hiking. Petoskey is a four-seasons community. From beautiful fall foliage, to morel mushrooms in the spring, to top-notch skiing and snowboarding in the winter months, Petoskey has it all.

The Upper Peninsula awaits just across the Mackinac Bridge, and a great place to start is  the small coastal town of St. Ignace. Nestled on the straits between the Great Lakes of Michigan and Huron, the town is a haven for fishing enthusiasts looking to capitalize on the salmon, steelhead and lake trout that populate the bountiful waters. For the best chance of landing the big one, take an excursion with one of the charter companies in the marina. For a bird’s eye view, try a hike along the Cut River Bridge Trail.