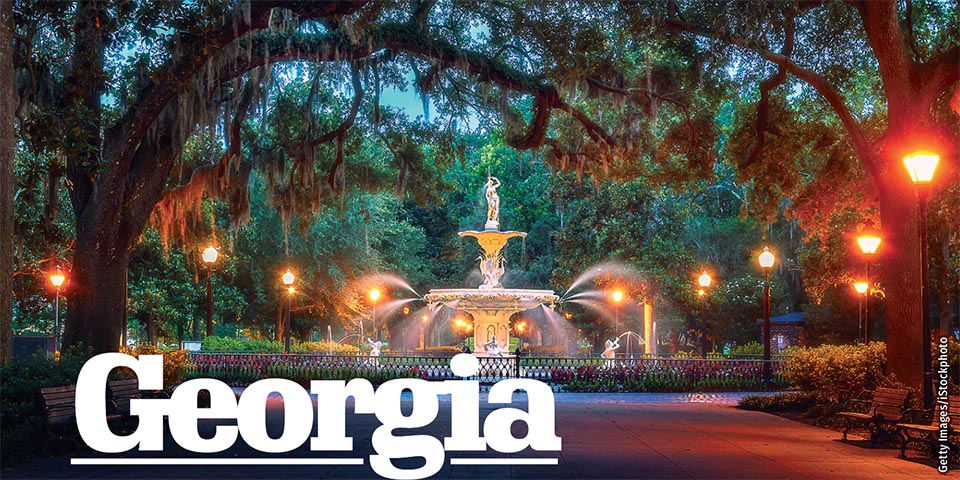 Georgia never fails to enchant visitors. From the scenic mountain landscapes of the north to the rugged Atlantic coast, there’s beauty to be found across the Peach State. Relics of the Old South mingle with modern sensibilities.

Atlanta has enough tourist attractions to go toe-to-toe with any of the nation’s heavy hitters, from Orlando to LA. Sample Coke from around the world at the World of Coca-Cola, tour one of the world’s largest exhibits of aquatic creatures at the Georgia Aquarium, or walk above the forest canopy at the Atlanta Botanical Garden.

Georgia’s Atlantic coast is bejeweled with a glittering city, Savannah. At first glance, it might seem like time has stood still here, as horse-drawn carriages roll along the cobblestone streets, passing by antebellum mansions. Those who dig a little deeper will find that Savannah also has its finger on the pulse of the future, as dining and entertainment abounds. 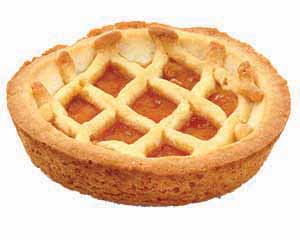 Famous for its delicious peaches, it’s no wonder that Georgia’s most popular dessert is the sweet and buttery baked pie known as peach cobbler. Packed with fruit filling and topped with a biscuit crust, this crowd-pleasing dish is best served with a scoop of vanilla ice cream and a sprig of mint. Just one bite and this summertime treat will always be on your mind.

Discover the untamed side of the Peach State off the Atlantic Coast. Cumberland Island National Seashore preserves the state’s largest barrier island, offering 17 miles of silky sand, 50 miles of hiking trails and ample sites to explore. One of Georgia’s most spectacular habitats can be found in Okefenokee National Wildlife Refuge, home to North America’s largest blackwater swamp. Diverse flora and fauna fill the waterways and woodlands.

During the Civil War, the Confederacy enjoyed their last major victory in Georgia before the tide finally turned. This piece of history is shared at the Chickamauga & Chattanooga National Military Park, commemorating a clash between the gray and blue in 1863. Just over a year after these battles, the Union’s General Sherman would capture the city of Atlanta and go on his March to the Sea, burning entire towns along the way.

Georgia’s 100-mile Antebellum Trail in Savannah is a window into an outdated way of life. Nearly a century later, Georgia would also play a pivotal role in the civil rights movement. Martin Luther King Jr. was born in the state and spent his formative years in his father’s church before becoming a pastor there himself. Several memorials and museums commemorate his life and tell the story of the movement he inspired.

Georgia is the starting point of the famed Appalachian Trail, which winds runs nearly 2,200 miles north to Maine. Those not up for the full, epic experience can find shorter excursions along the 79 miles of the trail that cut across the mountainous landscape of northern Georgia.

Located near the geographic center of Georgia, Macon boasts a rich past. Native Americans made the region home more than 17,000 years ago, and the 1600s and 1700s saw waves of settlers putting down roots. Today, living history abounds on the streets of Macon, with 14 designated historic districts and more than 6,000 structures nominated for the National Register of Historic Places.

Nothing makes Maconites prouder than their musical heritage. Jazz vocalist Lena Horne began her career with City Hall youth choir performances in the 1930s; the Reverend Pearly Brown, blind from birth and the last of America’s great street blues singers, began arriving from his hometown of Americus by bus in the 1940s to play his guitar with a cup attached; native son Richard Wayne Penniman—better known as Little Richard—redefined rock and roll in the 1950s; Otis Redding, “The Mad Man from Macon,” became the 1960s’ seminal soul artist; and the Allman Brothers honed Southern Rock here in the 1970s. You can still walk in the footsteps of musical Macon giants in places like Grant’s Lounge, the Original Home of Southern Rock, and the Big House, a Tudor Revival mansion on Vineville Avenue where the Allman Brothers lived in the early 1970s. 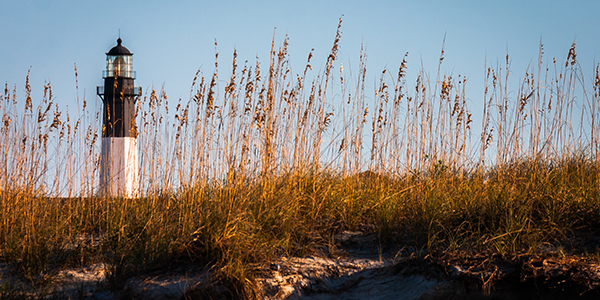 Take the ferry to Cumberland Island National Seashore to explore the natural coastal landscape. Watch the feral horses that run free along the sandy shores and through forests. Tour the historic structures to learn the story of the island’s earliest inhabitants and visitors. Fun for the whole family can be found about 17 miles east of Atlanta at Stone Mountain, named for the massive quartz dome that rises over the landscape below. Check out the Confederate Memorial Carving etched into the rock’s side. The surrounding woodlands are contrasted by colorful theme park attractions. Fifteen miles of trails wind through the terrain, with the mile-long climb to the top offering expansive views.

Georgia’s Atlantic coast is studded with gems. Near Savannah, Tybee Island is a perennial vacation favorite. Also off the coast is a hidden oasis, Jekyll Island. With a history of human habitation stretching back as far as 5000 B.C., the island has been a retreat for English colonial troops, the world’s most influential millionaires, and now, family and friends from far and wide.

Ten miles of shoreline and five distinct beaches provide a stretch of sand to suit every taste. Home to “nature’s jungle gym,” Driftwood Beach is a must-see. Great Dunes, with its central location and abundant pavilions, is the go-to for a full family beach day. The wide expanses of sand at Glory Beach make for great lounging. Saint Andrews is perfect for birding and shelling. South Dunes, with its elevated observation deck and picnic area, is the excellent for lovers of wildlife.

For those who want to unplug, but still want modern conveniences, Jekyll’s Beach Village and historic Pier Road are home to unique shopping and dining options. From frozen yogurt to flip flops, these shops have all the things you need and none of the things you don’t.