Always associated with “Gone with the Wind” and Sherman’s March to the Sea, Atlanta has a colorful and yet dynamic past. Today’s community is a collaboration of innovative businesses, flourishing neighborhoods and welcoming residents. This is the genteel South’s version of “cosmopolitan,” with shiny skyscrapers and trendy shopping districts, bustling city streets and sophisticated attractions, all served up with a sweet mint julep.

If you’re looking for a chance encounter with a beluga whale or African penguins, the Georgia Aquarium is the place to be. Visitors can swim with whale sharks, play with sea otters and train sea lions. The facility has a virtual reality simulator and offers scuba training, and a celebratory dive with the animals as a payoff. You might even find Nemo there! There is no better way to beat the heat and humidity of a summer day in Atlanta than to “Shoot the Hooch!” Grab an inner tube and a cooler full of your favorite beverages to float down the Chattahoochee River. Tour companies offer rental equipment and transportation to the put-in and pull-out sites or make the trek on your own. The World of Coca-Cola is a museum like no other. Discover the history of the king of the carbonated beverage world, how it was created and see the spread of Coca-Cola around the globe. Taste over 60 versions of the drink and answer for yourself that age-old question: Coke or Pepsi?

Some 15 miles northeast of Atlanta, Stone Mountain Park is Georgia’s most visited attraction. The park boasts 3,200 acres of natural beauty, including 15 miles of wooded nature trails, recreational activities and multiple historical sights. A long list of events fill the calendar, including Pumpkin Festival Glow by Night, Stone Mountain Christmas and Snow Mountain. Agile hikers can take the 1-mile trail to the top of the mountain, but most visitors opt for the Summit Skyride cable car with breathtaking panoramas of the surrounding landscape. The park’s other crowd pleasing attractions include the Scenic Railroad which sets out on a 5 mile journey around the base of the mountain, Skyhike adventure ropes course, mini-golf and much more. 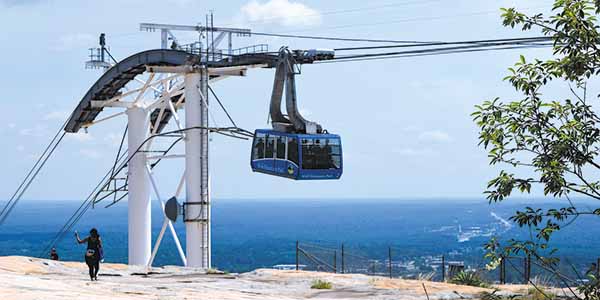 Plan to spend some time at the Atlanta Botanical Garden, a 30-acre urban oasis that includes an award-winning Children’s Garden and a unique Canopy Walk. Visit the Edible Garden to see how fruits and vegetables make beautiful landscapes, or check out one of the largest indoor plant collections in the Southeast. Ever-changing exhibitions and events make the garden an inviting place for the whole family.

The first weekend in May brings out rock music lovers from around the country. They all converge at the Shaky Knees Music Festival, where more than 60 bands, from up-and-comers to internationally renowned acts, take the stage for three days of intense riffs, licks and jam sessions. Follow the roadies to Central Park to arrive before the first downbeat.

The Atlanta Dogwood Festival celebrates everything we love about spring. An outdoor event packed with talented artists, musicians and dancers, the fest has midway rides, disc dog demonstrations, running competitions and delectable foods. It takes place in mid-April, just as those fragrant dogwoods blossom.

From Ruins to Restoration

Originally settled by the Creek Nation, most of the Native Americans were removed from Atlanta by 1821, and white settlers filtered into the region the next year. By the 1830s the railroad came through town and with it, more residents.

The Civil War saw Atlanta grow into a major distribution center. When Northern troops entered the city, the chaos of war followed, and fires consumed the town as retreating troops destroyed anything that could be useful to Union troops. Explosions caused by fighting for the highly contested city contributed to the conflagration. After the conflict, Atlanta was rebuilt, almost from the ground up. The turbulent history is honored in monuments and memorials found throughout the city.

Atlanta enjoyed worldwide attention when the city hosted the 1996 Olympic Games. This event is honored in Centennial Olympic Park in the heart of the city, where visitors can enjoy green spaces and gaze at monuments honoring the games.

Fit for a King

Atlanta boasts a strong heritage in the civil rights movement, as their most prolific representative, Martin Luther King, Jr., was born and raised in the city. King taught civil disobedience and peaceful protest as ways to eradicate segregation and acquire fair treatment for people of color. Explore the Martin Luther King, Jr. National Historic Park, which includes the original Ebenezer Baptist Church, where King was baptized. Walk the World Peace Rose Garden and the King Center. Listen to Dr. King’s moving speeches and sermons while touring Ebenezer Baptist Church, where his father preached.

Atlanta has risen a hub of technology, cultural variety and professional sports teams. The city’s future is being defined by innovators who envision even more growth and success from this diverse and thriving urban center.