Ontario offers the best of both worlds for RV travelers. Go camping and hiking the province’s wide-open spaces or hit the stores and sites at urban centers like Toronto. Ontario also is home to vineyards between Toronto and Niagara Falls. In autumn, the province’s fall foliage attracts legions of leaf peepers.

This is Canada’s most populous province. In fact, one in every four Canadians lives in an area around Lake Ontario’s western shores known as the Golden Horseshoe. Both Toronto, the country’s largest city, and Ottawa, its capital, are Ontario residents. Meanwhile, Northern Ontario is celebrated for its untouched, beautiful wilderness areas.

When it comes to culture, Toronto is at the first rank of world cities—only London and New York City, for instance, stage more live shows. The Royal Ontario Museum takes on the immense task of sorting out all of the city’s cultures and stories. That entails housing more than six million objects in one of North America’s largest museum complexes. The Art Gallery of Toronto holds the greatest collection of Canadian art in the world among its 80,000 pieces.

The National Gallery of Canada in Ottawa has been collecting since the 1880s and displays works of priceless Canadian heritage along with objects from the United States and Europe. The National Gallery affords spectacular views of Parliament Hill, which was established as the government home in 1867 when the Dominion of Canada was formed by the British colonies of Nova Scotia, New Brunswick, Ontario and Quebec. The original High Victorian Gothic buildings were destroyed by a fire in 1916 but rebuilt in the same distinctive style.

With shores to more than half a million lakes and rivers, including four of the Great Lakes, paddlers are never at a loss for trip choices in Ontario. No wonder the Canadian Canoe Museum in Peterborough boasts the world’s greatest collection of canoes. Water adventures include tubing on the Grand River through Elora Gorge, sea kayaking in Georgian Bay—designated a World Biosphere—or taking on the rapids of the Ottawa River, the “Whitewater Capital of Canada.” 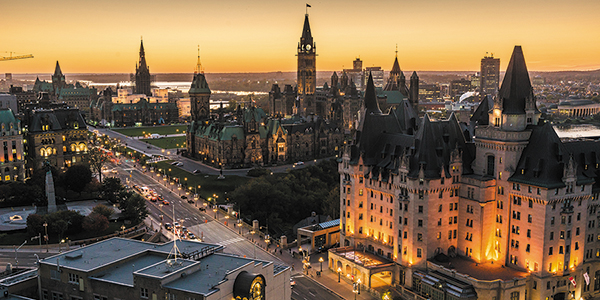 The northern expanses of Ontario are so lightly visited that some of the world’s largest stands of old growth pine trees fill the forests. Push a canoe into the waters of the Temagami region and set out through 1,500 miles of interwoven water trails. Along Highway 11, the Polar Bear Habitat and Heritage Village gives visitors a chance to swim with polar bears—on the other side of a thick plexiglass window.

On Lake Ontario, the sand blows into 180-foot dunes. On Lake Huron, you’ll find places like Wasaga Beach, the world’s longest stretch of freshwater beach at more than eight miles. Out on the water, visitors can choose from more than 30,000 freshwater islands to explore. At the tip of the rugged Bruce Peninsula, which bisects Lake Huron, visitors will discover Five Fathom National Marine Park and Bruce Peninsula National Park. These sit atop the geographical phenomenon known as the Niagara Escarpment. The world-famous Bruce Trail begins its serpentine 550-mile journey here, eventually leading truly adventurous explorers to Niagara Falls.

Ontario sponsors more than 3,000 annual festivals, so you should be able to find a party any weekend. Celebrations don’t get any bigger than the Canadian National Exhibition, which takes up much of the month of August to fit everything in. “The Ex” began as a simple agriculture and technology fair in 1879. Today’s event is now the country’s largest fair, with more than one million visitors coming to the shores of Lake Ontario for shows, exhibits, concerts and an old-fashioned carnival midway.

Celebrated across three weekends in February, Ottawa’s Winterlude offers skating on the world’s largest ice rink: the Rideau Canal Skateway.  Illuminated ice sculptures in Confederation Park and workshops in the art of igloo building also make up a big part of the event. In the summer, when the ice thaws, the family-friendly Rideau Canal Festival leads the way in environmentally conscious big events by aiming for a zero carbon footprint. 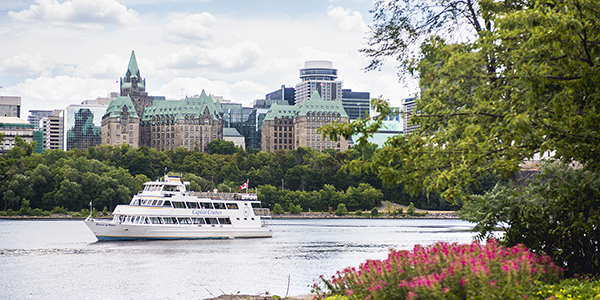 Ontario is about as far away from its British origins as it is possible to stray. It also boasts quite a mix of ethnicities and cultures. Almost half of the population was born outside of Canada, and that cultural diversity is reflected in the provincial cuisine. Hakka, a dish of masala fried rice and thread chicken that was bred in India, is a Toronto menu tradition that is scarcely found outside of India. Food carts in the city’s six Chinatowns, Little Italy, Koreatown and the Greek enclave of The Danforth all dispense their own ethnic culinary delights.

Toronto’s signature sandwich is peameal bacon, a trimmed boneless pork loin rolled into cornmeal and grilled to a crisp exterior. The St. Lawrence Market, one of the world’s most esteemed fresh-food markets, serves as a reliable destination for lovers of peameal bacon. If it is after dinner time in Ottawa, the dessert of choice is the BeaverTail, which is whole wheat dough fried and hand-stretched into a flat oval and smeared with butter. From there, any sweet topping is on offer, from brown sugar and cinnamon to chocolate and fresh fruit. Create the dessert sensation of your dreams.

In the countryside, you can enjoy award-winning cheddar cheeses from the province’s many small dairies or nosh on wild blueberries that grow in abundance across northern Ontario. And working sugar bushes make Lanark County the “Maple Syrup Capital of Ontario.”