It’s no wonder that Vancouver frequently tops the list of “World’s Best” lifestyle cities. Boasting a prized natural harbor with beautiful views of the ocean and snow-capped mountains, Vancouver has one of the most enviable settings of any city. Few places combine the cosmopolitan verve of a modern city with sandy beaches, mountains, forests and an outstanding ski resort less than 85 miles away. Vancouverites are the first to expound their city’s incredible attributes and the city’s streets ripple with a self-contented pride and infectious energy. With several big-hitting attractions, excellent bars and restaurants, and a passion for the great outdoors, Vancouver soon gets under your skin.

Located on the southwest corner of British Columbia’s mainland and a three-hour drive north of Seattle, Vancouver is one of the most livable cities on the planet. Summer temperatures hover in the low 70s in August, enticing lovers of the outdoors to explore its beautiful cityscapes and sprawling open spaces. One of North America’s most scenic highways, the Sea-to-Sky Corridor (Highway 99) runs from Vancouver to just north of Whistler and delivers spectacular ocean and mountain views. Surrounding attractions include South Pender Island to the south and Chatterbox Falls to the north.

Within the space of a day in Vancouver, you can sunbathe on a beach, go kayaking and fishing on spectacular waterways and hike through majestic forests. At the harbor entrance, the 1,000-acre Stanley Park is the city’s heart and lungs, with manicured gardens, playgrounds and a large aquarium for all members of the family. In Lynn Valley Park, 10 miles north of downtown, the Lynn Canyon Suspension Bridge sways dramatically 50 meters above the canyon. Several trails, including the popular Baden Powell Trail (1.5 hours round trip) meander through Lynn Park’s majestic forests and lead to natural swimming pools and waterfalls. One of Vancouver’s most popular hikes among locals is the Grouse Grind, a two-mile intermediate climb up to the top of Grouse Mountain, also known as “Mother Nature’s Stairmaster.” 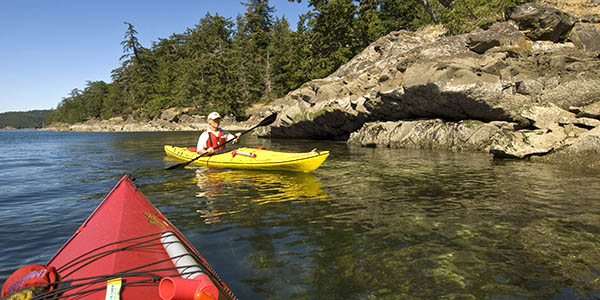 From the funky enclave of SoMa to the salty seafront of Kitsilano, Vancouver is hip yet unpretentious, a city that balances work and play with flair. In expansive Stanley Park, walking or cycling the seawall is a visitor’s rite of passage. Across the water, you can graze your way through the city’s culinary heritage at Granville Island’s Public Market. And when it comes to fine dining, Vancouver boasts some of the most eclectic and sophisticated cuisine in North America. From creative seafood dishes to mouthwatering sushi and piquant Thai, or even fish and chips at Spanish Banks Beach, Vancouver has cemented its role as a top culinary spot. Tap into your intellectual curiosity with a trip to Science World, built in a geodesic dome overlooking False Creek. 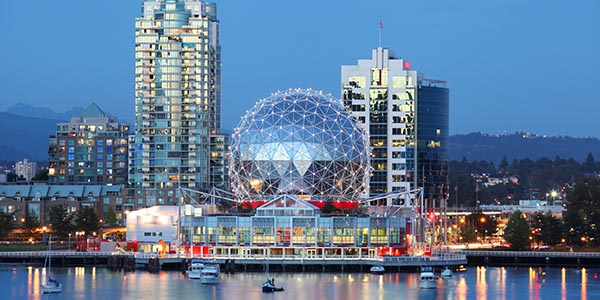 The city of Vancouver in British Columbia, Canada

With its stunning setting and outdoorsy denizens, Vancouver is one of the world’s finest festival hosts. The Vancouver Jazz Festival has been hailed as the world’s best jazz festival. Running for 10 days from late June, peaking with Canada Day (July 1) celebrations on Granville Island, the festival showcases 1,800 musicians and 400 concerts at over 40 venues throughout Vancouver; past headliners have included Miles Davis and Herbie Hancock. In July, the three-day Folk Music Festival at Jericho Beach is a more offbeat affair, with music from across the musical spectrum, including hip hop, blues, rock and gospel. In late January, Vancouver’s biggest food event kicks off. The Dine Out Vancouver Festival, originally conceived as a promotional vehicle for local restaurants, has morphed into a gastronomical extravaganza with an array of foodie activities.

Frequently hailed as the best North American ski resort, Whistler Blackcomb played host to the 2010 Olympic and Paralympic Winter Games and has never looked back. Less than two hours by car from Vancouver via the jaw-dropping Sea-to-Sky Highway, Whistler delivers more vertical runs and ski lifts than any of its North American peers. From backcountry skiing to heli-skiing, snowmobiling, sleigh riding and snowshoeing, Whistler ticks the boxes for all ages, levels of experience and interests. Quaint Whistler Village, established in 1966, may be small, but it is effortlessly worldly and marries an unpretentious sporty vibe with sophisticated shopping and dining. When the snow melts, Whistler draws in nature enthusiasts with a pristine forest that’s home to marmots, eagles, bears and wolves. Visitors can indulge in rafting, mountain biking, hiking, golfing and horseback riding.

As Vancouver’s oldest neighborhood, Gastown was the “original Vancouver” and is now a National Historic Site with quaint cobblestone streets lined with restored brick buildings. Browse fashionable and quirky shops. At the Vancouver Maritime Museum, you can delve into the city’s rich history and maritime traditions.