Known as the gem of Florida’s Treasure Coast on the Atlantic, St. Lucie County offers a little bit of everything that makes the Sunshine State great. From the endless miles of serene white sand beaches on Hutchinson Island to the historic hot spots of downtown St. Lucie West, each destination along this laid-back coastal stretch is unique on its own. The one thing they all have in common? Welcoming locals and year-round weather that simply can’t be beaten.

Paradise in the Sun

St. Lucie County is a boater’s paradise, home to just about every seaside adventure under the sun. The town of Fort Pierce is famous for its seasonal sea trout run, attracting anglers from around the world. Charters can be hired in town for everything from deep-sea excursions to float-fishing the meandering inland waterways.

Kayaking and canoeing the Indian River Lagoon and the St. Lucie River are great ways to get a close-up perspective on the surroundings. You might catch a glimpse of the area’s famous manatee residents while you’re at it. On St. Lucie’s north fork, visit the Oxbow Eco-Center, which boasts 225 acres of hiking trails, interactive exhibits and the chance to get hands-on with the many reptiles that call south Florida’s coast home. 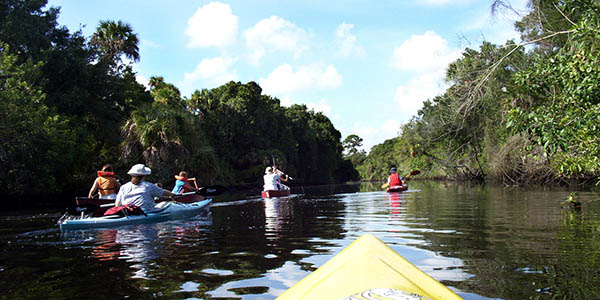 Kayaking on the north fork of the St. Lucie River.

Part of the same barrier island chain, North and South Hutchinson Island are two distinctive destinations, each with their own appeal. Head north for state parks with remote stretches of sandy beach, private sunrise views and a stunning array of wildlife on display including sea turtles, dolphins, whales and pelicans. At the Port St. Lucie Botanical Gardens, you can explore local and exotic flora in a refined, tranquil surrounding that often plays host to evening concerts. South Hutchinson has numerous waterfront restaurants with live music. 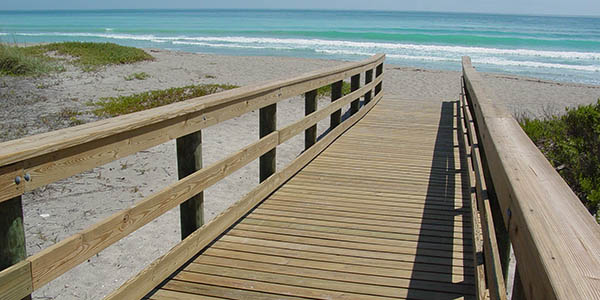 Boardwalk leading to the beach at Hutchinson Island.

The area is also home to the world’s only museum dedicated to the fearless spirit of the naval warriors who trained in the area’s coastal waters. The National Navy UDT-SEAL Museum boasts displays to the exploits of these legendary fighters, including a special exhibit on the raid that led to the death of Osama Bin Laden.

Baseball fans know that Florida becomes a hot spot for both fans and scouts during the spring months when major league teams head south for spring training. The New York Mets have called Port St. Lucie their springtime home for years, and there’s nothing quite like seeing the team play in the casual preseason atmosphere. You can also spend the afternoon exploring the historic downtown district’s boutiques and restaurants.

The nearby PGA Village Golf Resort offers the chance to try your luck on the greens with a state-of-the-art training facility, multiple courses and a performance center where experts can help you improve your game. Learn about the rich heritage of golf or take your choice of three challenging 18-hole courses.