Georgia’s former state capital is a charming Atlantic Coast city known for its gorgeous architecture, lush parks and excellent museums. Founded in 1733 by British colonists, this port city was an important center for cotton distribution until the Civil War, and many of its houses and municipal buildings date back to the 18th century. Some of the city’s popularity is due to the success of the book-turned-film, “Midnight in the Garden of Good and Evil,” which was set in picturesque Savannah. 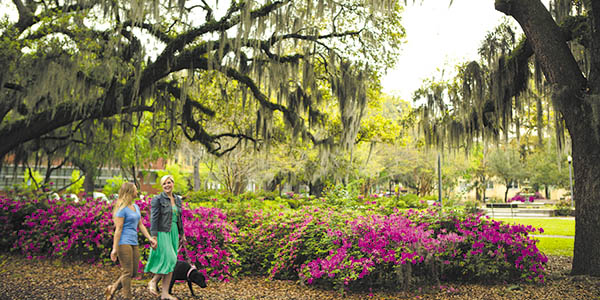 Savannah’s coastal location makes it an excellent choice for fishermen and boating enthusiasts. Several local tour operators offer dolphin-spotting excursions, while those looking to fish can easily charter boats for deep-sea fishing expeditions from several companies in the area.

Escape to the Island

Many visitors depart to Tybee Island, a quiet beach town that’s a 20-minute drive east of Savannah, where there are also plenty of opportunities to kayak, paddleboard or just bask in the sun. The area’s waters abound with grouper, snapper and a huge variety of migratory fish depending on the season.

The city’s star attraction is the Savannah Historic District, celebrated for its collection of 18th- and 19th-century architectural marvels in the Georgian and Greek revival, Gothic and Beaux Arts style. Some of the most popular attractions include the Marshall House, which was built in 1851, making it one of the city’s oldest hotels. Beware: According to local lore, the structure just may be haunted. Other noteworthy sites include Johnson Square, the city’s oldest quadrangle, plus the 1873 Cathedral of St. John the Baptist, which looks out over Lafayette Square.

Spend time strolling through Chippewa Square, which dates to 1815 and centers on an equestrian statue of General James Oglethorpe, the British colonist who designed Savannah’s lauded city plan in the 1700s. If it looks familiar, it’s because the opening “park bench” scene of Forrest Gump (1994) was shot on the north side of the square.

On Columbia Square, Davenport House Museum (built in 1820) is one of the most beautiful Federal-style houses in the U.S. Less than a mile south, the resplendent 30-acre Forsyth Park, at the center of Savannah’s Historic District, features the much-photographed Forsyth Fountain and the 300-year-old Candler Oak Tree. 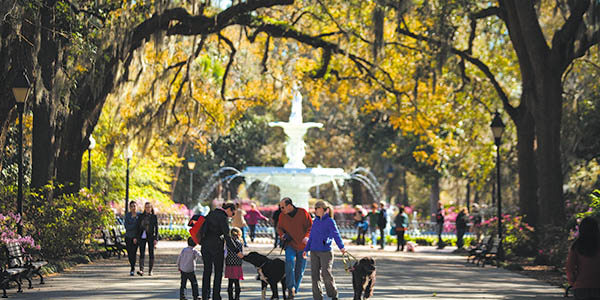 Surrounded by oaks, Forsythe Fountain serves as the centerpiece of Forsythe Park.

Garden of Good and Evil

One of Savannah’s biggest draws for many visitors is its association with “Midnight in the Garden of Good and Evil,” both the book and the movie. There’s no shortage of tours available to the most important sites mentioned in the true-crime story, which recounts a murder that occurred in the city in the 1980s. The Mercer Williams House is another hot spot; here visitors will find a gorgeous collection of centuries-old furniture, artwork and Chinese porcelain.

Savannah is famed for its superb seafood and soulful Southern restaurants. Every day is punctuated with easily adopted antebellum rituals: a civilized afternoon tea, a pre-dinner cocktail and an outrageous dessert platter. Without a doubt, in Savannah’s Historic District or along River Street, you’ll experience some of Georgia’s top eateries, ranging from super-fancy haute cuisine to cozy bistros, speakeasies and even gastro pubs.

South of Downtown Savannah, historic Fort McAllister State Park sits on the banks of the Ogeechee River. Flanked by colossal live oaks and a marsh, the park’s namesake fortification was completed in 1862 and features imposing earthworks. The fort withstood seven attacks by naval bombardments before it was finally taken in 1864 in a bayonet charge that concluded General Sherman’s “March to the Sea.”

Within easy reach of Savannah, the Isle of Hope is a charming foray into rural antebellum life. A “living museum,” immaculately restored cottages and homes laced with Spanish moss date back to the town’s founding in 1840 as a summer retreat for Savannah’s elite. With its dazzling light, quaint streetscapes, scenic beauty and sweeping views of the Wilmington River, Bluff Drive has long been the inspiration of artists, filmmakers and writers.

The ruins of Wormsloe Plantation House can be accessed via the stunning Avenue of the Oaks, a 1.5-mile passageway of majestic live oaks (worth the trip in itself). Savannah’s oldest structure, the Wormsloe estate belonged to Noble Jones, one of Georgia’s preeminent colonial denizens and a representative to the Continental Congress. Visitors can stroll among the ruins and visit a small museum featuring artifacts unearthed at Wormsloe. An insightful audiovisual presentation sheds light on the founding of Georgia in 1733.