A slender arc of barrier islands, known as the Outer Banks, shield the Atlantic shore of North Carolina. The isles are synonymous with the wild horses that run free along sandy shores or historic lighthouses standing guard above pristine beaches. Whether you seek relaxation or recreation, you can find it in the Outer Banks.

Beating it to the Banks

To the west of the Outer Banks, a string of sounds separate the islands from the mainland of North Carolina. To the east, you’ll find the endless waters of the Atlantic. Most travelers driving to the Outer Banks take U.S. Route 64 or U.S. Route 158 to North Carolina Highway 12, which connects at the northern end of the islands. Visiting the southern end requires a trip on a ferry. A number of small towns line the islands, including Corolla, Nags Head, Hatteras and Ocracoke. With their location off the mainland, the Outer Banks enjoy distinct weather pattern strongly influenced by the water and winds that help keep the winters warmer and the summers cooler than the rest of North Carolina. 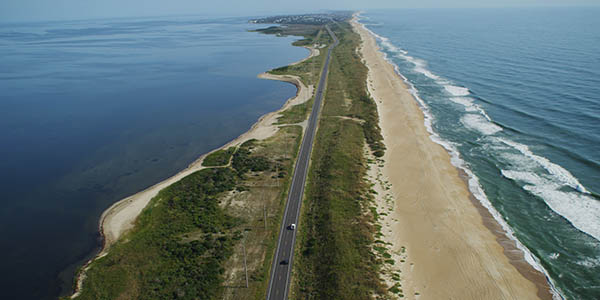 Fisherman flock to the region for the opportunity to throw in a line off one of the many piers or to join a chartered vessel for deep-sea fishing. Whether you fish in the sound, in the surf or offshore, you can angle for a variety of species. Not into lines and hooks? Paddlers will find a wide range of waterways to explore. The calm waters of the sounds invite those seeking tranquility and the chance to observe wildlife, while the ocean beckons to those seeking thrills in the surf. The banks’ waterways also are popular waterfowl hunting grounds. For a quintessential Outer Banks experience, take a trail to the top of a sand dune. Adventure-seekers can surf, sail or explore the beaches on horseback or ATV.

More on the Shore

With over 100 miles of shoreline, the Outer Banks boast several seaside retreats. A dozen state and national parks, seashores and wildlife refuges preserve the diverse natural landscapes, providing space for outdoor recreation. At Cape Hatteras National Seashore, the iconic black-and-white Cape Hatteras Lighthouse stands guard over a dangerous section of the Atlantic. Climb the 257 steps to the top for epic views. Along the Outer Banks, diverse wildlife can be spotted, from resting seals to nesting sea turtles. Set sail on a cruise to watch for dolphins as a colorful sunset fills the skies. Inland, the small towns of the Outer Banks welcome visitors with a plethora of shopping, entertainment and restaurant options, from family friendly to upscale enclaves.

No matter when you visit, you just might find a festival happening somewhere in the many small towns that dot the Outer Banks. Runners can take their pick from the First Flight 5K, the Flying Pirate Half Marathon or the OBX Marathon, which wind through stunning coastal scenery. With a beautiful waterfront stage, the Outer Banks Bluegrass Festival in October is sure to delight with some of North Carolina’s traditional music. The region is teeming with fresh seafood, which is celebrated with the annual Seafood Festival, held each October. However, you don’t have to have a festival to enjoy this regional fare. For a taste of the Outer Banks, join in a seafood boil, go crabbing or catch your own dinner straight out of the surf.

The Colony That Went Quiet

For history buffs, there’s no better place to start than on Roanoke Island at the Fort Raleigh National Historic Site. It was here, between the years 1585 and 1587, one of the first English attempts to colonize the New World was made. It began when 117 men, women and children landed on the Roanoke Island’s shores on a trip sponsored by Sir Walter Raleigh. No sooner had the colony been established than it disappeared without a trace. The only message left by the colonists was the word “Croatoan” carved into a post in the abandoned settlement. Historians attribute the disappearance to conflict with the Native Americans or starvation.

The Roanoke Island Festival Park and the live theatrical production of The Lost Colony (held in Fort Raleigh National Historic Site) tell the story of these intrepid but ill-fated settlers. The theatrical production is one of the longest-running plays in the United States. Climb aboard the Elizabeth II to imagine life aboard the ships that brought the first visitors to Roanoke. Learn about pirates, shipwrecks and centuries of maritime history with a visit to one of three North Carolina Maritime Museums found along the Outer Banks.

Soar into the skies with a stop at the Wright Brothers National Memorial, which commemorates the pioneering siblings’ experiments with flight on Kitty Hawk’s Kill Devil Hills. It was here on the morning of December 17, 1903, that Orville and Wilbur Wright recorded the world’s first controlled powered flight, covering 120 feet in just under 12 seconds. The Memorial includes a 60-foot monument sitting atop Big Kill Devil Hill, replicas of the 1902 and 1903 gliders and an interactive museum. Along with tools and machines used during the Wrights’ pioneering experiments, two old wooden sheds re-create the world’s first airplane hangar, and there are life-size replicas of the 1902 glider and the 1903 flying machine (the original 1903 flying machine is on display in the National Air and Space Museum in Washington, D.C.).

Boasting the tallest natural sand dune system in the eastern United States, Jockey’s Ridge State Park, located in Nags Head, is famed for its sunset vistas. A fine preamble to the ritual is to take the moderate self-guided trail which stretches for 1.5 miles from the park’s parking lot across the dunes and back. If you’d prefer to skip the sand-in-your-toes experience, you can stroll the length of the 384-foot boardwalk instead. At the soundside access, on the southwest corner of the park, conditions are prime for kayaking, windsurfing and swimming. For more high-flying adventures, Jockey’s Ridge is hailed as one of the nation’s top hang-gliding destinations. Beginner, intermediate and advanced hang-gliding lessons are available at Kitty Hawk Kites, the world’s largest hang-gliding school.

While Cape Hatteras Lighthouse gets a lot of the attention, it’s not the only beacon in the region. About 40 miles to the north stands Bodie Lighthouse, whose tall, striped form has adorned countless postcards of the region. The Bodie Island Lighthouse has 200 steps, the equivalent of a 10 story building, so be ready for a workout.

Further north, on Corolla, the historic, red-brick Currituck Beach Lighthouse rises 162 feet above undulating dunes of white sand. Before the lighthouse’s construction in 1875, when a beacon of light first extended for 18 nautical miles across the turbulent ocean, many ships were lost in the infamous 80-mile “Sea of Darkness.” From Easter to Thanksgiving, it’s well worth climbing the 220 steps for panoramic views. A series of informative exhibits at the lighthouse base elucidate the history of lighthouses, the Fresnel lens and the region’s much-storied shipwrecks.

Corolla also serves as home to the area’s wild Spanish mustangs, which live and thrive as they have for centuries on the Outer Banks. It’s illegal to go within 50 feet of, or feed, the horses. If you want to increase your odds of spotting the majestic equines, two-hour, four-wheel-drive tours are available with specialist outfitters, including Wild Horse Adventure Tours, which explore the coast from Corolla to Currituck beaches. Visitors can see small herds wandering along the ocean shore or grazing on the dune grass. 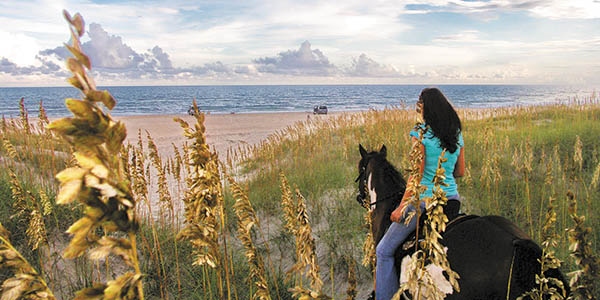 From the Ocracoke Ferry Terminal, day trips to Ocracoke Island traverse the Hatteras Inlet, where seagulls squawk and dolphins frolic (if you’re lucky, you’ll catch sight of these playful creatures). Located near the very southern tip of the Outer Banks, the island was a favorite hideout of Blackbeard, the notorious pirate who terrorized the Atlantic Coast; it was just off Ocracoke that he met his end at the hands of British Captain Robert Maynard. Stop by the island’s visitor center to get a sense of the island’s history and learn about the many recreation possibilities available. Distinctive restaurants and shops, along with pristine beaches, make this a spot to remember.

To experience the Outer Banks southern beaches, take the car ferry (just over two hours) from Ocracoke to Cedar Island, where the local National Wildlife Refuge extends across most of the undeveloped island; there is a Lilliputian town and a mere 350 residents on the island. Over 10,000 acres of marshlands and 3,480 acres of woodland provide refuge to a rich profusion of wildlife, including deer, black bears, otters, marsh rabbits and over 250 species of birds, including seaside sparrows, marsh wrens, northern harriers and ospreys. The refuge also provides a winter habitat for ducks, a nesting habitat for colonial waterbirds, and a sanctuary for endangered species including the brown pelican and American alligator. Several trails wind through the area.