As the Gulf Coast’s oldest city, Mobile may surprise you with its charms. While New Orleans may have stolen the Gulf Coast limelight, Mobile (known affectionately as the “Little Easy”) works its magic on unsuspecting visitors with its compelling museums, historic landmarks, distinctive food, unfailing Southern hospitality and lively festivities that reach a crescendo each February for Mardi Gras. Mobile’s appeal is distilled into seven historic districts, where canopies of live oak trees arch above elegant boulevards lined with gorgeous antebellum mansions.

Some 150 miles east of New Orleans, 168 miles south of Montgomery, and 60 miles west of Pensacola, Mobile sits on the Gulf Coast. In Mobile, the southern terminus of Interstate 65 is located at an interchange with Interstate 10. With a mild subtropical climate, Mobile is one of the wettest cities in the nation with an average annual rainfall of 66 inches. Temperatures in July reach an average high of 90 degrees, while the average low temperature is 42 degrees in January.

The Mobile area offers no end of opportunities for family-friendly land- and water-based exploration. Rich history and outdoor recreation combine at Historic Blakeley State Park, nestled in one of the most ecologically diverse sections of Alabama. Within the park, more than 16 miles of walking, biking and horseback riding trails lace through pine and hardwood forests studded with colonial-era homesteads and artifacts that speak to the region’s rich Native American history.

A Paddle Trail Runs Through It

Perfect for families, the 3-mile Ron Jones Paddle Trail is a scenic float along the Chickasaw Creek that flows through tupelo, red maple and cypress forests populated with pelicans and alligators. Extending across Baldwin and Mobile counties, the Alabama Coastal Birding Trail is a magnet for ornithologists, with over 50 birding sites located along a series of interpretive loop trails.

Founded by the French in 1702 as the capital of French Louisiana, Mobile is Alabama’s oldest city. The port city endured epidemics and Native American resistance to become the region’s economic and cultural heart. During the 19th and 20th centuries, Mobile was known as the Paris of the South, and its illustrious history resonates through the city’s seven historic districts, which provide a dazzling architectural time line. A tour of the 1830s Greek Revival Historic Oakleigh House evokes the elegant life of plantation owners during the cotton boom with lavish furnishings and exquisite interior design. The History Museum of Mobile provides an illuminating insight into the region’s Native American history, and there’s a gallery of artifacts related to Confederate naval history. 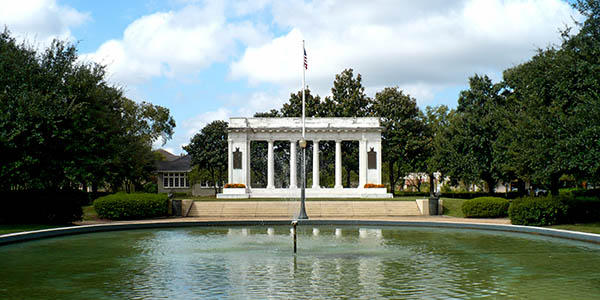 You could spend days exploring Mobile’s fine museums, historic homes and stately gardens. The 20-room Bragg-Mitchell Mansion is one of the Gulf Coast’s grandest estates and the most photographed building in Mobile. Tours of the structure, built in 1855, provide visitors with a glimpse into the splendor of the Old South. One of the South’s oldest public gardens, the stunning 65-acre Bellingrath Gardens and Home and its grand estate were born of a Coca-Cola fortune: Walter Bellingrath was one of the nation’s first bottlers. The home’s period furnishings include German silver countertops and sinks, and a butler’s pantry with a stunning display of silver, crystal and china. 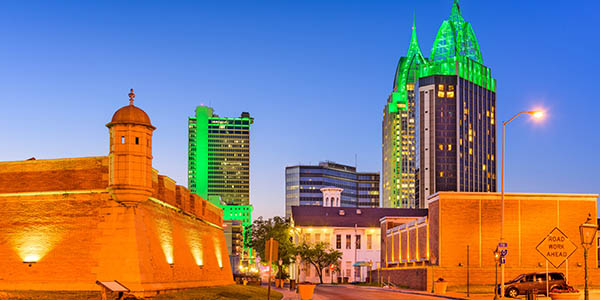 Mobile’s downtown skyline with Fort Conde in the Foreground.

Established by Frenchman Nicholas Langlois in 1703, Mobile’s extravagant Mardi Gras festival is the oldest Carnival celebration in the U.S. The pre-Lent party remained the preserve of exclusive societies who hosted private masked balls with elaborate costumes. Today the celebration has become a more democratic show of fantasy and fun, with public parades that involve extravagant floats populated by monarchs who bestow gifts upon cheering onlookers. Formal balls do still exist and adhere to a strict dress code: Women must wear floor-length gowns and men must wear a tuxedo. To learn more about Carnival’s origins and celebrations, it’s worth a visit to the Mobile Carnival Museum, with 14 gallery rooms that showcase everything from the intricacy of costume designs to the mechanics of float construction.

A must for history buffs and families with young kids, Battleship Memorial Park is home to World War II battleship USS Alabama, winner of nine battle stars, and the submarine USS Drum, the oldest American submarine on public display. Home to a crew of 2,500, the 45,000-ton USS Alabama’s illustrious World War II history reached its zenith in September 1945 when it led the American Fleet into Tokyo Bay. Maps are provided for self-guided tours that include visits to crew quarters, the insides of the main gun turrets and anti-aircraft guns. A number of  World War II tanks, aircraft, boats, memorials and artillery also can be viewed at Battleship Memorial Park.