In July of 1863, the small, southeast Pennsylvania town of Gettysburg was the epicenter of the battle that turned the tide in the Civil War. More than 150,000 Union and Confederate troops clashed here, and over 50,000 soldiers fell in bloody combat. Today, the gently rolling hills commemorate these dark days with several museums and parks both in town and in the surrounding countryside. Encompassing almost 6,000 acres south of town, Gettysburg National Military Park preserves the battlefield itself and provides solemn spaces for remembrance. However, Gettysburg is more than a historic site. Visitors will find a delightful town at the center of Pennsylvania’s scenic Fruit Belt region, which provides ample opportunity for relaxation and recreation.

Located just north of Pennsylvania’s border with Maryland, Gettysburg is almost halfway between Pittsburgh and Philadelphia. Popular tourist areas of Lancaster (known as Dutch Country) and Hershey (home to the famed chocolate plant and theme park) are conveniently located nearby. Washington, D.C., and Baltimore, Maryland, sit approximately 90 minutes southeast of Gettysburg. Most visitors arrive via U.S. Route 30, which connects Interstates 81 and 83. Weather varies greatly around the year, with hot, humid summers and cold, snowy winters. During the spring and fall seasons, come prepared for changing weather conditions. 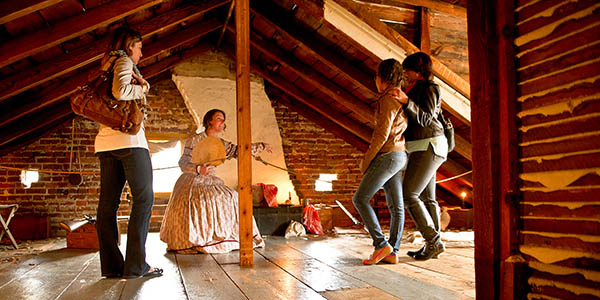 While Gettysburg National Military Park is notable as a historic site, there are also opportunities for outdoor recreation within the park. Exploring the grounds on horseback offers a unique perspective. A hike up Little Round Top provides a poignant overview of the battlefield while scrambling around the rocks at Devil’s Den can bring the battle to life. Nearby, the Blue Ridge Mountains offer stunning backdrops to Caledonia, Pine Grove Furnace and Mont Alto state parks, where you can enjoy golfing, fishing, hunting, hiking, boating, biking and swimming. The mountain streams provide great habitat for trout, while numerous lakes are teeming with bass and perch. Nearby, Michaux State Forest is a good pick for deer and small game hunting. Trails for horseriding and ATVs snake through the area. Drop a line in one of the stocked trout streams for a hearty dinner.

Located in Adams County, Gettysburg is surrounded by quirky and compelling attractions. Considered the state’s Fruit Belt, the rolling green hills that proliferate in the region form a patchwork of orchards and vineyards. Tour the Gettysburg Wine and Fruit Trail to get a taste of the region by sampling local ciders, wines and brews. Visit Lincoln Square to enjoy the vibrant vibe of downtown Gettysburg, home to art galleries, enticing shops and local restaurants. You’ll find historic taverns and pubs side-by-side with hip cafes offering vegetarian and vegan fare.

Living in the shadow of a bloody battle, Gettysburg is considered by some to be the most haunted town in America. Explore these tales of the paranormal with a ghost tour or candlelight walk. A tour of the Museum of Haunted Objects in town will acquaint you with some of the world’s most spooky curios. Feel the spirit of haunted dolls, possessed typewriters and, of course, witchy Ouija boards.

Each spring, the hills of Adams County become white and pink as the blossoms on fruit trees begin to bloom, filling the air with a sweet scent. Gettysburg’s Apple Blossom Festival is held each May to commemorate the arrival of spring, while the National Apple Harvest Festival celebrates the bounty of fruit each October. Crafts, music, vendors and, of course, food abound. For the history buffs, there are several events marking the region’s role in the Civil War. The largest is the annual Gettysburg Civil War Battle Reenactment, put on each July by the Gettysburg Anniversary Committee. Hear the boom of cannons as soldiers march in period regalia. Gettysburg National Military Park annually recognizes Dedication Day on November 19 to commemorate President Lincoln’s Gettysburg Address. 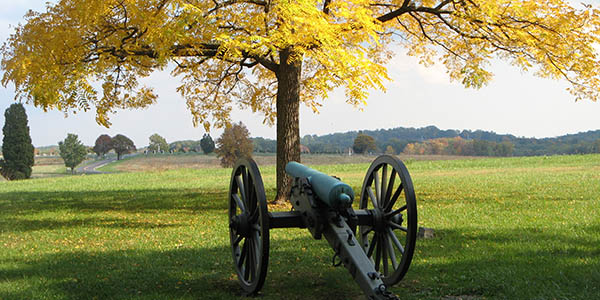 Gettysburg National Military Park is the top draw in the region. Tour the battlefield and museum to gain insight into the strategies that led to the fighting. You can also pay your respects at the Gettysburg National Cemetery or at one of the many memorials that dot the sprawling park. Several ranger-led tours and living history programs help put you in the boots of the combatants. Back in the town of Gettysburg, several Civil War-era homes preserve the lives of locals who were affected by the battle. Stop by the David Wills House, where President Lincoln stayed during his Gettysburg Address visit. Check out the Shriver House, whose attic once served as a sniper’s nest for a confederate sharpshooter; historic reenactors on-site shed light on this dramatic episode. Another piece of the region’s history can be explored at the National Apple Museum in nearby Biglerville.