Atlanta has established itself as one of the South’s most cosmopolitan, diverse and innovative cities. Beyond world-class cultural attractions, from Coca-Cola to CNN, Atlanta is also a cradle for inventive musicians, hip-hop artists and chefs. But for all its intrepid trendsetting, Atlanta remains the quintessential Southern belle, replete with nods to “Gone With the Wind” and with a lingering passion for fried chicken and sweet tea.

In the Heart of the Peach

At the southern fringes of the Appalachian Mountains at 1,050 feet, Atlanta straddles the Eastern Continental Divide, some five hours west of the Carolina-Georgia coastline. Long, hot, languid summers are the norm, with average temperatures in July of 80 degrees but frequently rising to 100 and over. Interstate 285 (also known as the Perimeter) encircles Atlanta for 60 miles and connects with three major interstate highways to Atlanta: Interstate 75, Interstate 20 and Interstate 85.

The city’s favorite summertime gathering place, Piedmont Park is an inviting 200-acre tapestry of lawns and gardens. Locals run, rollerblade and cycle along meandering paths and trails, while young children frolic in playgrounds and at the aquatic center. Tourist attention centers on Centennial Olympic Park, with the Fountain of Rings: 251 computer-controlled water jets in the shape of the five Olympic rings, commemorating the city’s hosting of the 1996 Summer Olympics.

Within striking distance of Atlanta, nature lovers will find plenty of opportunities for water- and land-based adventures. Around 20 miles north of Atlanta, the Chattahoochee River National Recreation Area is home to a rich profusion of flora and fauna, including two dozen fish species and more than 240 bird species. The park’s most popular unit is Cochran Shoals, which is laced with a 3-mile fitness trail and fine bird- and wildlife-watching.

While Atlanta has deep historical roots, it’s also a thoroughly modern town. The vibrant streets and gardens of “Hotlanta” — a nickname reflecting the city’s trendiness — are home to a dynamic array of cultural and recreational activities. In the downtown area, the famous Peachtree Street is home to the Peachtree Center, a bustling hive of restaurants, bars and attractions. Just 2 miles to the north, the High Museum of Art, Atlanta’s preeminent art museum, showcases American decorative arts, 19th- and 20th-century American paintings, Italian Renaissance paintings and sculpture, as well as world-class traveling exhibitions.

Also in the downtown area, Buford Highway is where Atlanta’s gourmet chefs conjure modern versions of Southern classics. For exclusive designer labels, the Buckhead neighborhood is the place to head, while the superslick warehouse district of Bennett Street is a mosaic of cutting-edge galleries, studios and hip restaurants. You can experience life behind the cameras and record your own newscast on a tour of CNN. The Georgia Aquarium, the world’s largest with 550,000 square feet of exhibits and more than 100,000 sea creatures, is captivating for adults and children. Giant whale sharks, Australian weedy seadragons and Garibaldi damselfish are among the residents here.

Piedmont Park is home to many of Atlanta’s largest events including the Atlanta Jazz Festival in May, the Atlanta Pride Festival in October, the Atlanta Dogwood Festival in April and the Piedmont Park Arts Festival in August. Dogwood has evolved into one of the largest regional events with a lineup featuring acclaimed painters, sculptors and photographers. At Atlanta’s Beer, Bourbon and BBQ Festival in February, you can sample more than 40 bourbons and 60 beers along with delectable pulled pork, wings and other BBQ staples. In July, the Attack of the Killer Tomato Festival features dozens of the nation’s top chefs and mixologists. 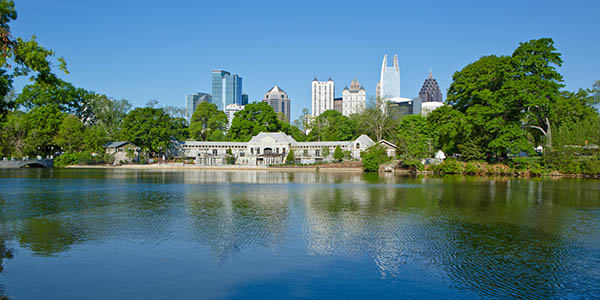 Some 20 miles northeast of Atlanta, Stone Mountain Park is Georgia’s most-visited attraction. A theme park and myriad outdoor pursuits complement the park’s centerpiece 1,686-foot granite-dome peak. Agile hikers can take the 1-mile trail to the top, but most visitors opt for the Summit Skyride cable car with breathtaking panoramas of the Appalachian Mountains. The Confederate Memorial Carving, at the base of the mountain, is the world’s largest bas-relief sculpture, standing 90 feet high and 190 feet wide. The brainchild of Gutzon Borglum (of Mount Rushmore fame), it portrays Confederate leaders Jefferson Davis, Robert E. Lee and Stonewall Jackson on horseback. The park’s other crowd-pleasing attractions include the Stone Mountain Scenic Railroad.