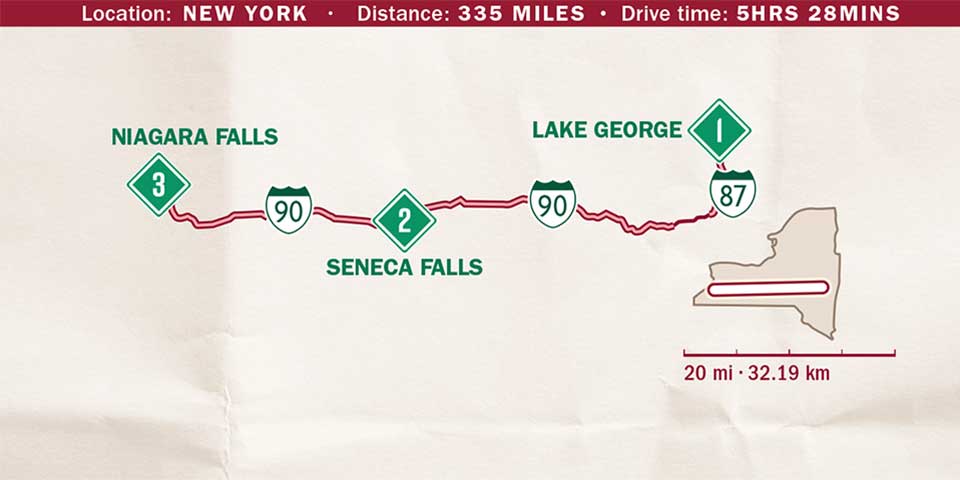 A seamless blend of small-town Americana and stunning landscapes, upstate New York has been a go-to vacation destination for nearly 150 years. Between historic steamboat rides on fun-filled Lake George, sipping world-class wines at the state’s top vineyards and the pure jaw-dropping power of Niagara Falls, this classic route from the Adirondacks to the Finger Lakes pairs some of the Empire State’s greatest hits with the chance to explore some of its lesser-known attractions.

Known as the “Queen of American Lakes,” Lake George’s pristine waters have become a destination for many families. At 32-miles long, the lake contains ample swimming and boating opportunities, while anglers can lines for the plentiful bass, pike and trout. For a unique summer experience, reserve your spot aboard one of the historic touring steamboats during the famous Thursday night fireworks cruises. For those who prefer dry land, there are plenty of trails in the area like the easy Pinnacle or the more formidable Black Mountain Range, both of which offer astounding views that can reach as far as Vermont. Also worth a visit is the nearby Fort William Henry Museum, which offers historical reenactments and exhibits on the lake’s importance as a strategic outpost. 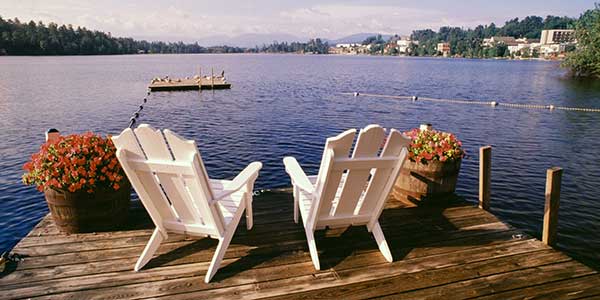 With rolling hills and a mild climate that often reminds visitors of Italy’s Tuscany region, the Finger Lakes have become one of the East Coast’s premiere destinations for wine lovers. Sip on award-winning Rieslings as you follow the Cayuga Lake Wine Trail, which stops at over a dozen wineries and tasting rooms, some of which are nestled on the lake shore. Boating and fishing are popular on both Cayuga and Seneca Lake, as is paddling the serene 12-mile long Cayuga-Seneca Canal, which teems with largemouth bass, pike and trout. Birders should head to nearby Montezuma National Wildlife Refuge where hundreds of migratory birds stop each year. Seneca Falls also boasts a charming downtown area that might seem familiar to film buffs — it’s the setting for the holiday classic, “It’s a Wonderful Life.” You can still visit the locations of many of the film’s most memorable scenes. 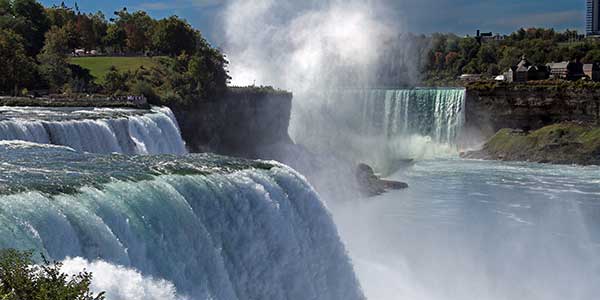 Getting up close to the most powerful collection of waterfalls in North America is a thrilling, tour-de-force experience. See it by going on the Maid of the Mist boat tour, which takes you right into the spray at the foot of Horseshoe Falls. If that doesn’t get you soaked enough, try the Cave of the Winds tour, which allows visitors to walk to the edge of Bridal Veil Falls, where 60 mph winds and a deluge of spraying water await. If you need a break from the thundering roar, the Niagara River Gorge Trail offers fewer crowds and incredible views of the gorge below, including the famed whirlpool rapids. Make time to visit the scenic Old Fort Niagara on the banks of Lake Ontario, where historical reenactors bring the drama of the American Revolution and the French-Indian War to life.