Explore the shores of an unspoiled getaway

Cape Cod is literally the world of “surf and turf” — and that’s not merely a reference to freshly caught lobster sharing space on a plate with filet mignon. It also means reveling in nearly 600 miles of world-class coastline surrounded by glittering waters.

Jutting into the Atlantic Ocean like an arm flexing its bicep, Cape Cod makes an idyllic destination for doing a bit of everything. Ride a bike in those “pedal pushers” you stuffed in the closet until summer (don’t worry guys — that fashion reference is for ladies only), or enjoy a game of golf at one of 40-plus courses. Dig clams for a sunset clambake or take a moment to do simply nothing but breathe in the fresh ocean air. Visitors can choose from a variety of quaint towns that line the Cape, ranging from small communities like Brewster on the “bicep” to bustling cultural centers like Provincetown at the “hand” of the cape. No problem with dining choices, either, as they run the gamut from formal, white-linen service to family-friendly, dockside eating.

One clam who won’t be coming to dinner is Doug the Quahog, Cape Cod’s Quahog clam mascot (a local dressed in an elaborate clam costume), whose job it is to forecast just how many days of beach weather to expect. The locals bring Doug out for his annual prediction on the first day of summer in June, appropriately named Quahog Day. This official celebration is marked with music and fun.

In contrast to its clammy weather forecaster, Cape Cod boasts a breathtaking coastline, measuring 560 miles. Part of this natural resource is the Cape Cod National Seashore, 40 miles of unspoiled Atlantic beach on the shores of Outer Cape Cod, stretching from Eastham (just north of the elbow) to Provincetown. The walking and biking trails that thread this unspoiled slice of shore lead to lighthouses, cranberry bogs and nature areas. Some of the best whale watching in the world is found in the water beyond the Cape, thanks to the rich feeding grounds along Stellwagen Bank off the shores of Cape Cod Bay. Local charters take you to spots where you’re likely to see dolphins, porpoises, seals and, from a safe distance, even a shark or two. 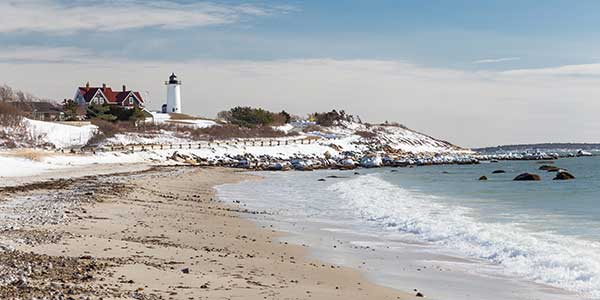 The Kennedy Compound, home of one of America’s leading political families, is located on the Cape’s southern shore, opposite the bicep. Nearby, the John F. Kennedy Hyannis Museum chronicles the all-too-short life of the youthful president with photos and videos.

Climb aboard a narrated, whistle-blowing, two-hour ride on the Cape Cod Central Railroad for a shoreline excursion boasting views best enjoyed by train. Expect to be awed by extraordinary scenery that includes sand dunes, salt marshes and cranberry bogs on this 50-mile journey to the banks of Cape Cod Canal. Departing from Hyannis, the train puts on lunch and dinner excursions, as well as special themed trips, to coastal destinations like Buzzards Bay and West Barnstable.

Regional ferries take you from Hyannis to Martha’s Vineyard, a scenic island located in southwestern Cape Cod. Historians say when British explorer Bartholomew Gosnold landed in 1602, he named the island (which had wild grapes back then) after his daughter. Martha’s Vineyard has neither a vineyard nor a winery these days, but with six different communities, it’s one of the most sought-after addresses for summer getaways.

Its golf courses are known the world over. Its cultural districts, Vineyard Haven Harbor and Aquinnah Circle, are foot-traffic friendly. Lighthouses dot its landscape, as do theaters, parks, a working harbor and several historic natural landmarks. From June through September, the West Tisbury Farmers Market, Chilmark Flea Market and Vineyard Artisans Summer Festival entice shoppers to fill bags with goodies.

Located on the island’s eastern shores, beautiful Edgartown preserves the best of small-town America, and there’s not a golden arch in sight. In the gleaming harbor, a procession of boats glide past Edgartown’s iconic lighthouse while, along Main Street, the town’s elegant locals shop for fine art and exclusive attire in the town’s swanky boutiques, galleries and antique stores. Steeped in whaling history, Federal- and Greek Revival-style captains’ homes have manicured front lawns framed by white picket fences draped with red roses.

Ferries also take visitors to Nantucket, where beaches, lighthouses, and preserved buildings and relics from Nantucket’s past as a major whaling port all wait to be explored. For your own historic catch, charter a boat for deep-sea fishing.

Nantucket’s 19th-century cobblestone streets brim with refined inns, exclusive boutiques, superb art galleries, dusty antique stores and a clutch of restaurants that proudly stake their claim to New England’s “best” clam chowder. One of the region’s most popular attractions, the Whaling Museum is housed in a former candle factory that was built following Nantucket’s Great Fire in 1846.

The museum details the history of Nantucket and honors the island’s erstwhile whaling supremacy through a well-conceived display of tools and illustrations, as well as artifacts from the Essex, the much storied whaling ship sunk after it was rammed by a sperm whale. The tragic episode provided author Herman Melville with the inspiration for the novel Moby Dick. Kids will marvel at the skeleton of a 47-foot sperm whale showcased in the museum . Also worth a peak is the Jethro Coffin House (built in 1686) which is the only structure to remain standing from the island’s original 17th-century English settlement.

A few more Cape Cod communities to consider: Falmouth, one of the largest towns on the Cape, with eight villages, 14 harbors and endless water sports (with equipment rentals available) on its southern coastline. Falmouth is best known for its road race held every August. Within Falmouth, the village of Woods Hole has great sportfishing, cute old buildings, and a marvelous aquarium with an outdoor sea pool and free admission for all.

Eleven miles northeast of Falmouth is Mashpee, which was predominantly a Wampanoag Indian town until the 1960s. Visitors interested in the tribe’s history won’t want to miss the Wampanoag Indian Museum. The town is also home to the Cape Cod Children’s Museum, which boasts a planetarium and other attractions for children of all ages.

Outdoorsy folk can go hiking in the 2,000-acre Waquoit Bay National Estuarine Research Reserve or go freshwater fishing at Lowell Holly, home to the Mashpee and Wakeby ponds and huge stands of holly. 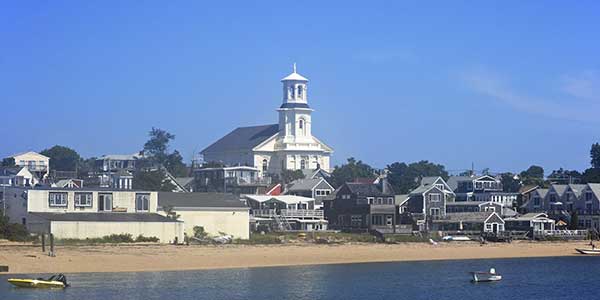 Did you know that the pilgrims landed in the area now known as Provincetown before reaching Plymouth Rock? In 1620, after their long journey across the Atlantic, the Mayflower landed on the shores of the then-unmapped cape region. In fact, the Mayflower Compact, the document that outlined governance of the new colony, was written onboard the vessel while it was moored offshore. Although the settlers considered staying on Cape Cod, their run-ins with local Native Americans convinced them to continue to sail westward. Plymouth was their next stop, and the rest is history.

The town commemorates this chapter of the Pilgrims’ past with the 252-foot Pilgrim Monument — the nation’s tallest all-granite structure. Around town, a series of blue plaques provide historical anecdotes; an East End garage squats upon the site where playwright Eugene O’Neill once resided. It was Provincetown’s diffuse light and saturated summer colors that attracted painter Charles Hawthorne, who inserted the ramshackle fishing town into the consciousness of New York creative class in the late 1890s, and garnered the town’s reputation as an artist’s colony.

Provincetown Art Association and Museum is the town’s premier cultural attraction. In addition to a stellar collection of more than 3,000 works of art, the museum presents a robust lineup of lectures, seminars, workshops, screenings and cultural events.