Situated less than 10 miles east of the Anaconda-Pintler Wilderness in southwestern Montana, Anaconda was once the copper mining capital of the nation. Founder John Daly, a silver miner by trade, was unable to name the town “Copperopolis” as he intended, because another Montana town by the same name was already supporting mining activity.

The name “Anaconda” was suggested by a friend of Daly’s, and the monumental rise (and eventual end) of the copper mining industry was epitomized by the Anaconda Copper Mining Company that he founded. However, like a snake that sheds its skin, the town changed as the copper mining business was closed. Today, it’s a haven for lovers of outdoor sports and devotees to nature and the environment.

With hot summers and cold winters, weather in the region can be as diverse and extreme as the rugged Montana landscape encompassing the town. At the same time, skiing and hiking are optimal during their respective seasons in this underrated western locale. Hit one of the trails that wends through the Anaconda-Pintler Wilderness to see panoramic views of the surrounding country. After the sun sets, Montana’s “Big Sky Country” appeal is impossible to ignore, and the town’s almost nonexistent light pollution makes the stars seem as close as the nearby mountains.

Anyone who grew up watching old Westerns should make a point of stopping by the Grant-Kohrs Ranch National Historic Site, where visitors can learn what life was like for cattlemen in the Wild West. Located 27 miles north of town, the operating cattle ranch shows gives visitors a glimpse into the day-to-day life of a cowboy. Take in the breathtaking vistas and explore the more than 7 miles of roads and trails to hike.

Just 11 miles north of town is Lost Creek State Park, where the majestic Lost Creek Falls cascade over a 50-foot drop. The gray limestone cliffs and pink and white granite formations that rise 1,200 feet above the canyon’s narrow floor makes the park a photographer’s dream. Visitors may catch a glimpse of mountain goats, vagrant shrews and bighorn sheep on the high cliffs. 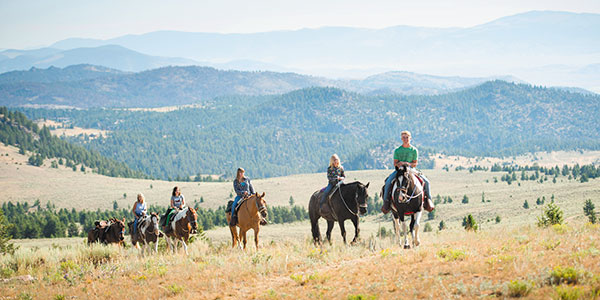 A walk through downtown Anaconda showcases the town’s role in economic development during a monumental period of western expansion. Reflecting a history of copper production that shifted from virtual dominance to eventual extinction, the Anaconda Smelter still serves as the area’s landmark institution. While the smelter operation itself was destroyed after being closed in 1980, the Anaconda Smelter Stack (known by locals as “the Stack”) still stands to this day on the east end of the town, and is one of the world’s tallest freestanding masonry structures. Resting on a concrete foundation and measuring nearly 586 feet high, the radial brick smoke stack is so large that the Washington Monument could easily fit inside it.

While the Stack itself is technically off-limits to hands-on treatment by visitors, Anaconda Smoke Stack State Park remains a popular destination for photographers, history buffs and tourists.

It also contains a display of artifacts used when the mining industry was still operational. Just a few blocks from the Stack, Benny Goodman Park serves as an ideal vantage point from which to admire Anaconda’s most notable landmark. Another popular stop is Washoe Park, which is bisected by Warm Springs Creek. Check out the park’s trout fish hatchery, which is the source of trout fishing in lakes across the region. 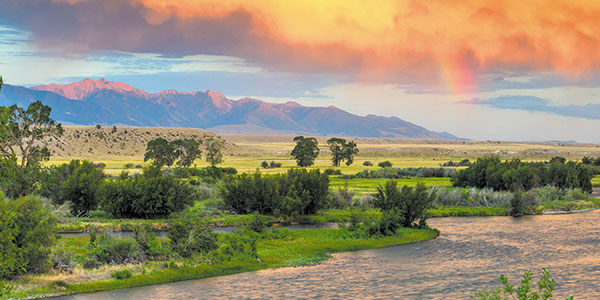 A Theatrical Display of Art History

Anaconda’s Main Street pays just as much homage to the area’s history as the parks that surround the town. Listed on the National Register of Historic Places, Washoe Theater was built in the 1930s using plans designed by B. Marcus Priteca, a renowned theater architect. The site of two previously unsuccessful movie houses, this building epitomizes the art deco style of design that was all the rage during the 1930s.

With astounding acoustics that result from painstaking attention to the sound system, the Washoe Theater’s amenities continue to do justice to even the modern films shown at the venue. While the restored theater is fully functional and open to the public, the Washoe’s silk curtain, adorned with a painting of deer stags, is so frail that only the luckiest of theater patrons have the opportunity to see it in person.